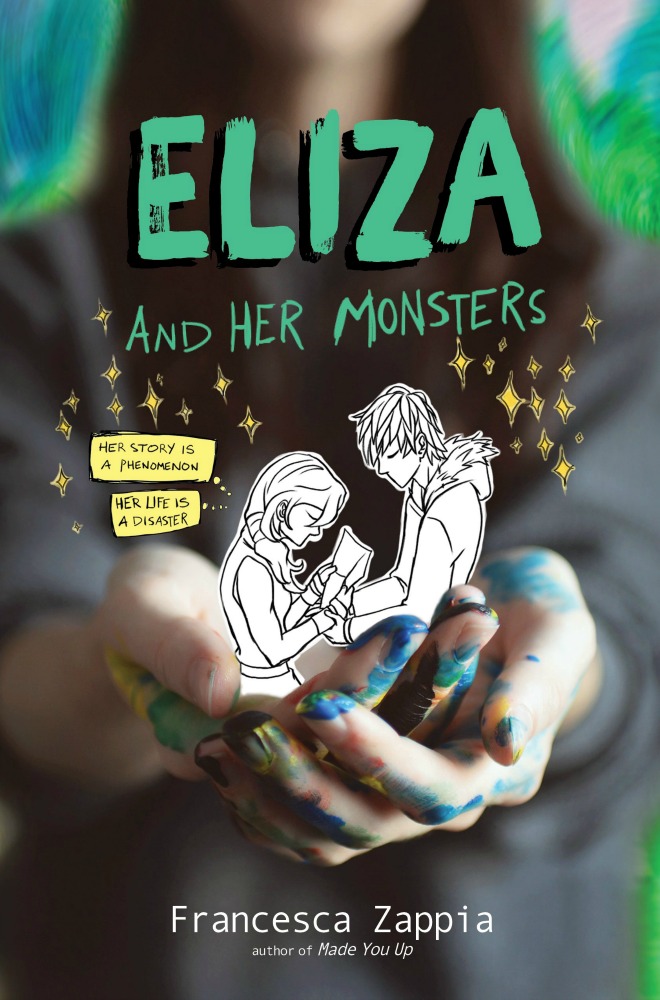 Eliza and Her Monsters

“There is a small monster in my brain that controls my doubt. The doubt itself is a stupid thing, without sense or feeling, blind and straining at the end of a long chain. The monster, though, is smart. It’s always watching, and when I am completely sure of myself, it unchains the doubt and lets it run wild. Even when I know it’s coming, I can’t stop it.”

Basically: Social outcast Eliza has never told anyone that she’s the creator of the hugely popular webseries, Monstrous Sea, until one of her biggest fans starts at her school in Francesca Zappia’s Eliza and Her Monsters.

At school, Eliza is a loner. Awkward and anxious, she keeps to herself..not that anyone is really interested in being her friend anyway. But online, she’s LadyConstellation, creator of the world-famous webcomic Monstrous Sea, beloved by millions. As far as she’s concerned, no one needs to know her real identity—until Wallace Warland shows up during senior year. One of Monstrous Sea’s biggest fans, Wallace has been writing fanfiction based on the comic for years and Eliza is terrified at the thought of revealing herself to him. But as they grow closer, sparks fly, and secrets and personal tragedies come out, threatening their happiness.

The book is formatted so that we see Eliza’s life play out alongside scenes from her webcomic and screenshots from the Monstrous Sea forums. It’s a cute way to introduce us to Eliza’s secret world, even though we don’t get the full picture (Monstrous Sea is actually a real thing, a passion project that Francesca Zappia has been working on for a while). It’s also fascinating to see the way her real life is juxtaposed with her online life: Eliza’s parents don’t understand quite how popular (or lucrative) their moody daughter’s comic is, which often leads to conflict between them when she walks around glued to her phone. Eliza is a prickly protagonist, so entrenched in Monstrous Sea that she doesn’t always know how to interact with real people, but her emotions leak off the page and break your heart.

Zappia makes several interesting comments on the relationships between artists and fans. When there’s a glitch on the Monstrous Sea website and Eliza’s scheduled post is delayed, messages pour in: some fans are concerned, while other are callous, prioritizing their needs over Eliza’s well-being. The expectations fans have when they support their favorite artists, the feeling that these creators “owe” us something, even at the risk of their own health, is unfortunately something we see in real life all the time.

Additionally, there’s a huge metaphor at play. Eliza’s life is full of fictional monsters—the creatures that inhabit her webcomic—but they also take on the forms of self-doubt and anxiety. It takes a public panic attack for Eliza to realize that she needs help, especially when it comes to balancing her real life with her online persona.

Similarly, Wallace has to confront his own demons. After his father’s tragic death, he stops speaking out loud around people, preferring to communicate with written words, but his relationship with Eliza forces him to acknowledge that he also needs help. In short, this isn’t a light-hearted romp of a book, but it’s a powerful look at mental health, particularly for artists who, more often than not, get bogged down by their own thoughts and don’t always get the help they need until it’s too late.

In the end: Read it! Eliza and Her Monsters is a tender exploration of first love and mental health, and it will resonate with anyone who’s ever struggled to put their creative ideas onto a page.