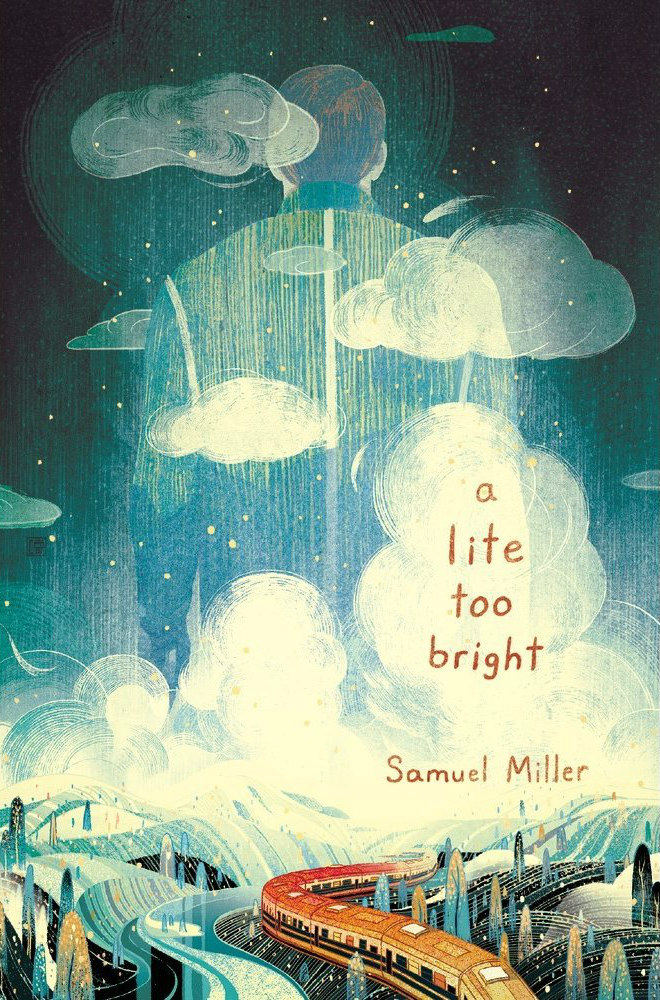 A Lite Too Bright

Basically: Arthur’s grandfather wrote one of the most famous novels of all time but when he dies, following a mysterious roadtrip, Arthur takes a trip of his own to learn more about the man behind the novel in Samuel Miller’s debut, A Lite Too Bright.

Arthur Louis Pullman the 1st is famous for writing A World Away, a book taught in schools across America. For four decades, he never published another work. After years of suffering from Alzheimer’s, he dies amid rumors that he was finally working on something new.

Arthur Louis Pullman the 3rd has always lived in his grandfather’s shadow. And now that he’s in therapy with a restraining order from his ex-girlfriend, Arthur has a lot of time to think about what his grandfather was up to in the week leading up to his death—especially because Arthur Sr. died in Ohio after disappearing from the family’s California home.

When Arthur finds a note hidden by his grandfather, in his aunt’s house, he sets out to follow his grandfather’s final route: A train ride from California to Ohio. Along the way, he pieces together clues left by his grandfather, bits of incomplete writing that seem to lead Arthur to some Great Purpose—and to a group of fanatics who worship Arthur Sr. in dangerous ways.

Arthur Louis Pullman the 3rd is a complicated character. He struggles with mental health issues, and occasional blackouts and hallucinations, but through it all he desperately wants to solve the mystery of his grandfather’s death. We get glimpses at his sweet relationship with his grandfather, bits of their history that allow Arthur to put the pieces together and figure out just how many secrets his grandfather was keeping from the rest of the family.

Somewhere in between California and Ohio, Arthur meets Mara, an Anglo-Indian girl with secrets of her own who happens to be a big fan of his grandfather’s work. We don’t get to spend a lot of time in her head but she’s just as fascinating as Arthur himself, and Miller does a great job of keeping us in suspense: Is Mara on Arthur’s side or is she waiting for the right moment to betray him to Arthur Sr’s fans—who have been looking for a fabled manuscript since his death?

Told through a combination of prose and free verse, A Lite Too Bright is an ambitious novel, especially for a debut. There are so many little threads running through the plot—including references to literary figures like Hunter S. Thompson and J.D. Salinger and a road trip through tiny American towns that barely sound real—but Miller manages to tie everything up in a neat and satisfying (if a little convenient) way.

The name Samuel Miller might not be too familiar to you but he was actually the singer of the pop rock band Paradise Fears (currently on hiatus). I knew going in that the writing would be lovely since his lyrics get stuck in your head (they’ve been stuck in mine since first seeing the band live in 2011). Like Miller’s songs, A Lite Too Bright is well crafted, full of twists that you barely see coming and characters who wouldn’t be out of place in a John Green novel.

In the end: Read it! But make sure you have a stack of post-its nearby to help you keep track of all of Miller’s beautiful words.