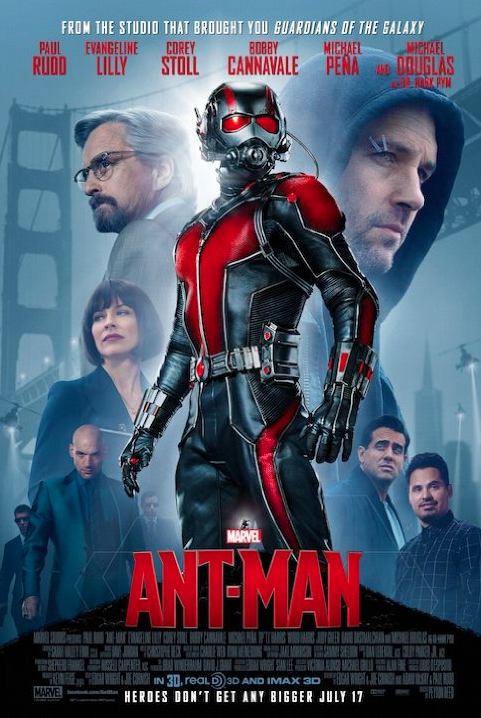 Basically: What is this? A movie for ANTS? Everyone deserves a second chance, even if its terms include the ant-sized heist of an evil science corporation—but pulling it off just might save the world.

So no one told you life would be this way… is what Scott Lang (Paul Rudd) must’ve been singing when he got out of jail and stepped into a literal bug’s life. We’ve crushed on Paul Rudd ever since Friends(shh, we’re old), and loved Marvel Comics just as long, so this was a match made in superhero heaven. And now we’re left wondering why the comedy-typecast Rudd hasn’t been doing action films all along. His trademark deadpan wit is more on point than ever, playing an ex-con (but the good, Robin Hood kind) who insists he’ll never break into places and steal stuff again… until Michael Douglas aka wicked-smart-scientist Dr. Hank Pym tells him to suit up. The result is Ant-Man, a, well… the clue’s in the name. When wearing this supersuit Lang can shrink to ant size and gain super-sized power, and also harness the power of—yep, ants. They’re annoying enough when they invade a picnic, but as an organized megatrillion-plus-infinity army, our bets are on them.

Of course where there’s a superhero, there’s a villain, but he’s rather tame by Marvel standards. This mad-scientist-come-warmonger Darren Cross (Corey Stoll) craves his mentor Pym’s approval on an unhealthy scale, ready to destroy the world using a copycat suit all so he can say “look what I made daddy, aren’t you proud?”. Someone get this guy a gold star, stat. Father-child relationships run throughout and had us aww-ing—there’s Pym and his uptight, ninja-slash-brainiac daughter Hope (Evangeline Lilly) bonding over badassery, and Lang trying to be the superhero his little girl already thinks he is. See? Aww. Oh, and a special shoutout to the adorably overexcitable best friend Luis (Michael Pena) for delivering more punchlines than punches, and for telling stories in a way we feel should be the new norm. Expect to come out feeling bad for ever squishing one of the little guys, and keep your eyes peeled for some Avenger-themed easter eggs (we’re judging everyone who leaves a Marvel film before the credits are over, you should know better by now).

In the end: Prepare to (willingly) share your popcorn with the ants, because this is Marvel-lous fun on a miniature scale.