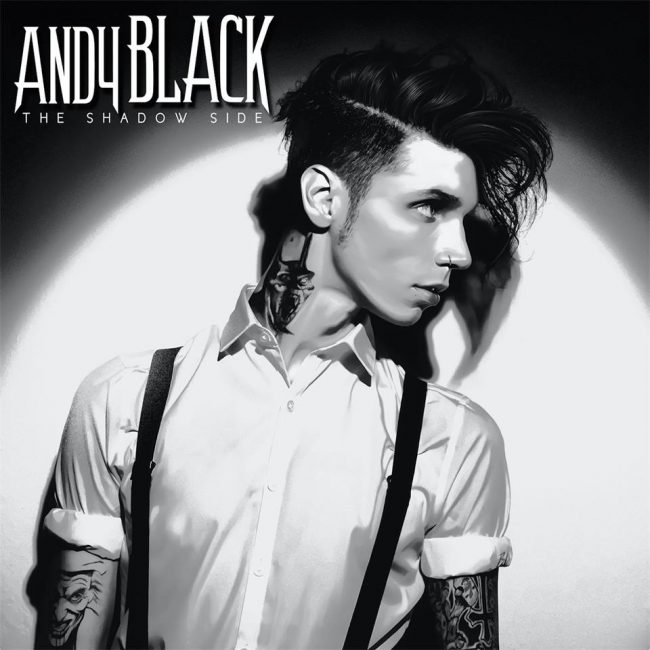 “Another moment breaks, the shadow side of me / It’s like holding on until I fall apart”

If anyone assumed that Andy Black was going to lose some of his edge by doing a solo album, he is here to prove them wrong from the very first note of The Shadow Side. Andy brought some pretty epic industry connections to the table to help tell his story, including Matt Skiba, Gerard and Mikey Way, and producer John Feldmann (5 Seconds of Summer, Panic! at the Disco, The Used). By collaborating with those he admires and using his own distinctive talents, Black creates a sound that you will immediately recognize as uniquely his own–with a core that is Black’s special version of modernized 80s hard rock. The Shadow Side has the dark metal tinge of Black Veil Brides, but with a hint of a more electronic sound and vocals that come off vulnerable while being just as passionate. This album sounds like the confessional diary that you just can’t put down.

Black begins the album with the hard hitting “Homecoming King” which shows off his incredible range through layering vocals from both his higher and lower register throughout the song. He also utilizes his lyrical talent by bearing his emotions in lines like “Don’t feel the world that you know / Caught in the tower singing / Oh no that’s not the life I chose”. Black stresses the importance of love in his life through incredibly relatable lyrics like “Can’t anybody hear me? / Can’t anybody see me? / Cause I think I lost my way” (“Put the Gun Down”) and “It’s not too late for two lost souls / We’re not the only ones to lose control / But we’re in this together” (“Paint It Black”).

He rounds out the record with a simpler, anthemic song called “The Void” that sets itself in contrast with the electronic influences, and recalls the feeling brought about by My Chemical Romance’s “Welcome to the Black Parade”. The song seamlessly wraps up The Shadow Side with the message that battling through your emotions is difficult, but it always ends up being worth it. This album may not be the next hard rock/metal thing you were looking for from Andy, but it is certainly no less bold and it definitely deserves your attention.

Buy it, Stream it, or Skip it?: Buy it! The Shadow Side is daringly confessional in a way you haven’t heard since your middle school emo days.