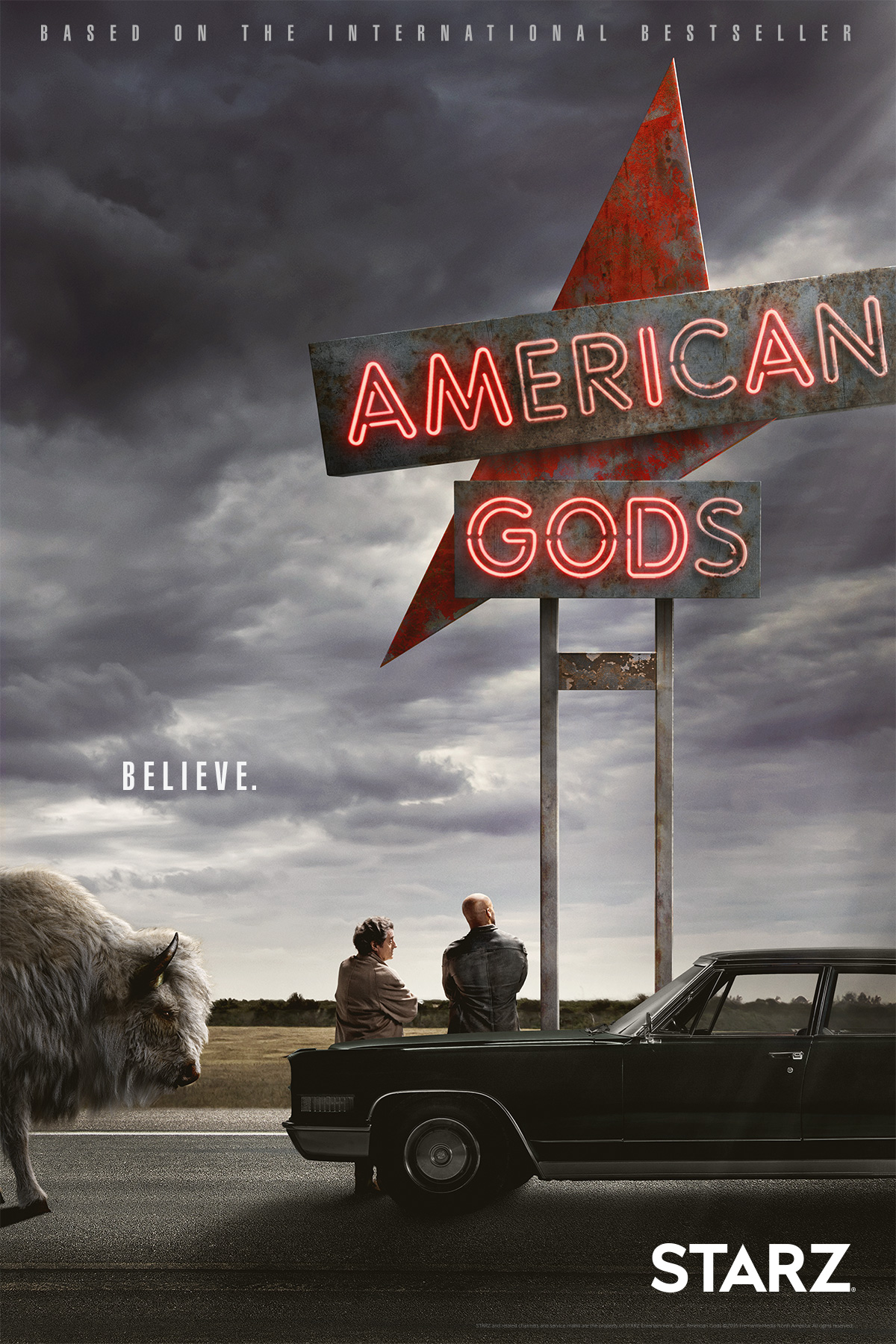 Basically: By the gods, this is good.

Tales of Blood, Sex, and Sacrifice

There is blood. Yes, geysers of it. Deliciously evocative sex. Oh wow, yes. There are fist fights and humor and all the things that make a fantasy series great. Yes, yes, and yes. It’s all enthralling, but what makes American Gods irresistible is it serves all this up with something many series lack: Truth. A truth so fearlessly real it grabs you by the shirt and pulls you into the screen. An M.O. that will quickly become familiar while watching the Starz adaptation—snatching you up and pulling you in is the method of the gods themselves.

The series, begins where the book did. Sort of. Before the beginning we’re presented with one of the many vignettes the book is known for (and the series will win awards for). Vikings land on the coast of the land that will one day be called America. What follows is as comedic but ultimately brutal as those days must’ve been. As an aside: If you’re squeamish, this show won’t comfort you. While those first Vikings struggle to return home, with prayers awash in blood and sacrifice, we’re alerted to what’s truly happening. This is a tale of how the Pagan gods arrived here. Immigrants brought them, the melting pot transformed them, and now they are our own; our American gods.

The flow of time often becomes an eraser, allowing us to forget that whether we were exiled, explorers, enslaved, or enamored of the legendary dream—unless we are descendants of the people indigenous to this land—we are immigrants and their children.

American Gods doesn’t let us forget who we are. It reminds us that what we are is varied and vicious and wildly beautiful in that we can overcome all of this and be human. So we begin with Shadow Moon (Ricky Whittle) a man serving out his last week in prison. A tragedy shortens his sentence and Shadow finds himself on a plane, on his way to his wife’s funeral. An overbooked flight doesn’t get him tossed off the plane…but instead lands him in first class where he’s sucked into conversation with a canny grifter who decides to call himself  Mr. Wednesday (Ian McShane). Somehow or another Wednesday tricks Shadow into working for him. And so it begins.

Neil Gaiman was clever in choosing the road trip as the format for his novel because it feels American. Setting his own discovery of the Heartland, parts of the country that are seldom exported in movies or onto television screens, has a symmetry of symbolism—two mirrors facing each other, one reflecting America and the other reflecting American culture. Through a trick of the light we’re able to see the two as a prism, refracting into a fantasy that shows us everything America is and what we imagine it to be in a single moving image.

idobi staffer Alex Bear shared her viewpoint from across the pond, “Having grown up watching American shows and movies and thinking the US was solely made up of New York and California separated by a whole mass of blank space in between, it was super interesting to find out that, wow, there are actually another 48 states out there. Who knew? (Rumour has it that’s what the 50 stars on the flag represent.)

“You believe in nothing, so you have nothing.”

There was such beauty to seeing the non-“Hollywood” side to American culture in a fantasy setting. Seeing what happened to the old gods once they were no longer revered and instead reduced to only as much power as they have human believers—or reduced to live among their believers. To discover the good, the bad, and the ugly of America, to find the good in the bad, the bad in the good, and the beautiful in the ugly. This is particularly well demonstrated in the side stories (the vignettes), bringing in very real, and wholly human interactions with the gods and their believers. Every aspect of the story will make you want to take a road trip which follows the journey Shadow and Wednesday are taking across America (but maybe without all the crazy. Maybe).”

American Gods doesn’t miss its opportunities. The writing, which is taken from Gaiman and enriched by showrunners Bryan Fuller and Michael Green, is lush and acerbic. You’ll have to rewind a few times to catch layered meanings or embedded jokes. The story is expanded in the series, giving us the surprise of new moments balanced out by verbatim dialogues from the book.

Alex adds, “Of course it wouldn’t be a Neil Gaiman story without meaningful dialogue interlaced with explorations of the self and the universe. Conversations between characters range from casual bar-room talk, to the callous-fatherly from Wednesday to Shadow. Themes about belief are naturally strong, raising the idea that things only exist because you believe they exist—like a god—or that true death, true hell is being forgotten. Because the old gods are fading, they grasp at any kind of adoration, like scraps of meat tossed to a dog under the dinner table. You feel at once pity for these relics of past glory, but you also realise their selfishness. In this way they serve a greater purpose: they are their believers; a product of half-remembered, twisted, and mish-mashed beliefs, desires, and flaws, and it shows up in their actions and interactions.”

At the center of the story is a war between the Old Gods, those born of religion and lore, and the New Gods, those evolved from technology and science:

“The TV’s the altar. I’m what people are sacrificing to.”
‘What do they sacrifice?’ asked Shadow.
“Their time, mostly,’ said Lucy. ‘Sometimes each other.”

Neil Gaiman tells us we all worship at the altar of entertainment and the internet, regardless of background or religion, and this gives those things great power. While the New Gods thrive the old gods seek scraps from museums and the faithful, sometimes from the television and film like Thor and Loki. The Old Gods are at a disadvantage and we wonder what or who will help them gain higher ground—without which nothing can save them. We’ve been too busy texting to care… Well, now we’ll be too busy watching who destroys who on Starz.

Another place American God capitalizes on its promise is in the use of music. Brian Reitzell does the damn thing, even enlisting Shirley Manson of Garbage to supply vocals for the series’ main theme. The music comes from everywhere, in every style, and is used to such dramatic effect that you’ll nod your head and murmur, “perfect” while watching. When you hear “The Weight” by The Band or “Stupid Girl” by Garbage you’ll feel it, and to borrow a cliche for the sake of truth—you won’t know whether to laugh or to cry. What’s certain is you will keep watching, not just the show but for the soundtrack to drop.

Since we’re talking about capitalizing on the promise of an epic series, we have to talk about the true power behind American Gods: The characters and cast. No performance is small. No one is forgettable. That’s a feat.

Ricky Whittle and Ian McShane’s stellar performances lead us to Pablo Schreiber’s Mad Sweeney, a 6’ 5” leprechaun who pulls coins out of the air and the breath out of your chest. Yetide Badaki plays Bliquis the goddess within whom all our talk of “sucking you in” becomes chillingly real. In Chicago we meet a Russian quartet of gods, and Peter Stormare’s Czernobog seduces us with his darkness before hitting us in the head with the power of a sledgehammer, while Cloris Leachman makes us wistful for glories we’ve never known. Then there’s Orlando Jones, whose anachronistic introduction the spider god Anansi so stunning cold-blooded it makes you wonder just how powerful Mr. Nancy is—and makes you yearn for a similar adaptation of the “American Gods” spinoff, “Anansi Boys”.

This cast, these characters, and the promise of those on their way could keep you watching by themselves. Every facet of this show could keep you watching on its own. When they’re all used together with such crafty acuity you can’t stop watching. At the end of Episode 4 you will gnash your teeth and petition the heavens for one more episode, just one more is all you’ll claim to need…but that won’t be true. Yet the gods, both old and new, will be kind. They will grant you your wish times four. Afterward, you will do the exact opposite of the title of Ep 4, rather than “Git Gone” you’ll stick around for whatever the capriciously seductive gods dish out next. Hell, you’ll revel in it.

In the end: You’ll soon be begging the American Gods to keep blessing your TV altar.