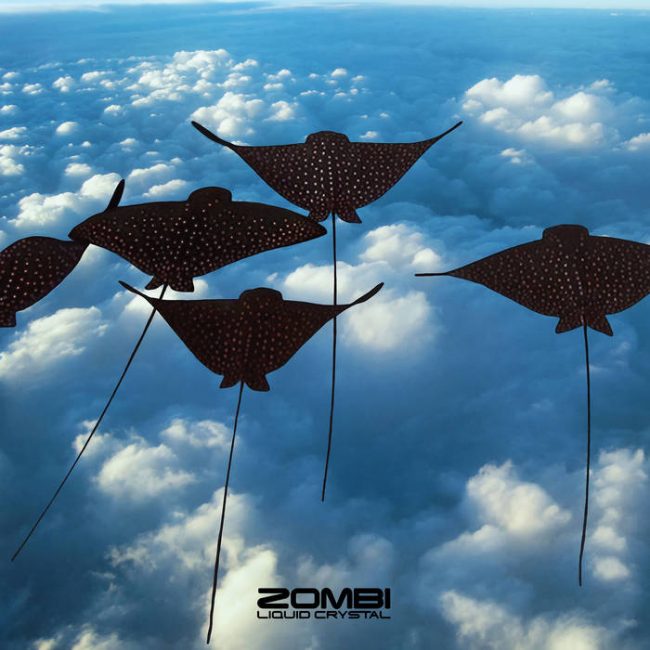 When an artist you like recommends a band, you tend to listen. It’s not necessarily going to sound anything like that artist’s music, as musicians tend to have a broad musical palate, but it’s guaranteed to be good.

Daron Beck (of the stellar band Pinkish Black) recommended Zombi even before he started guesting on covers on Steve Moore’s YouTube channel and, if I’ve learned anything from the time I’ve gotten to know Daron, it’s to trust his musical tastes. So when Zombi announced a new EP months back, I immediately pre-ordered it.

Liquid Crystal is a five-song EP clocking in at just over half an hour but it feels longer in the best possible way. Every song is layered and dense, dripping with synths and pounding drumwork. It’s hard to believe this much sound is coming out of two guys but it’s all Steve Moore on bass / synths and AE Paterra on drums (with special guitar assist from Phil Manley of Trans Am and Life Coach fame on one track).

Listening to the album as a whole, it hangs together perfectly—even though the various songs have different feels. The opening track, “Mangler” is a deceptively simple hook that keeps building until the song seems ready to unravel at the seams…then somehow holds together as it comes in for a landing. “Chant” goes dark and tense, with a martial drumbeat and grinding bass, before giving way to “Liquid Crystal”, a synth-and-guitar heavy track that feels like the opening credits to a lost-media film we will never see.

“This is the hero’s journey from mild-mannered nobody to world-ending badass.“

That might be as good a way to describe it as any, if I had to sum up the feel of the album as a whole: This is the soundtrack to a dark weird Jodorowsky/David Lynch co-production that we never got to see. Zombi channeled the infernal souls of Tangerine Dream, Vangelis, and John Carpenter into a musical monster that doesn’t sound like any of the three, but instead produces an album you can listen to over and over and still find surprising with each listen.

The standout track on the album for me is “Turning Points”. It’s an 11-minute epic that forges through prog rock, experimental drone metal, and post rock without feeling chaotic or stitched together. To abuse the lost-media soundtrack metaphor one final time, this is the hero’s journey from mild-mannered nobody to world-ending badass.

While Liquid Crystal plays out as the score to a lost cursed film in my head (OKAY, that’s the last time I’ll abuse the metaphor), I suspect it will bring up different associations for everyone who listens to it. Maybe that’s this record’s power; while it makes a strong statement on its own, it’s up to you to decide what that statement means.

Stream it, Buy it, Skip it?: Buy it. The vinyl release is a thing of beauty, but pick it up on your platform of choice and add it to your regular rotation.