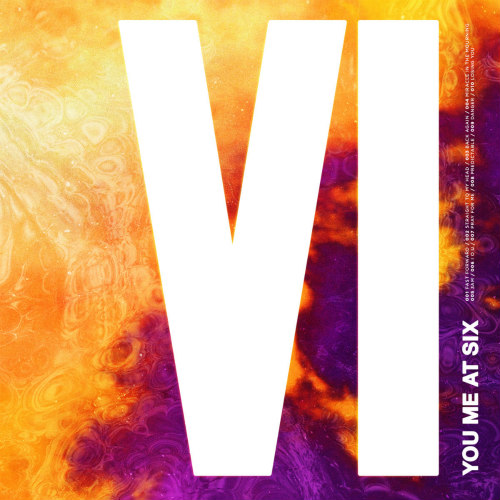 Forget what you know about You Me At Six. The band is back for their sixth album and they’re determined to forge a new path for themselves. Rightfully so—it’s been a decade since they released their debut Take Off Your Colours and they’re no longer the angsty teens they were back then.

And what better way to prove they’re all grown up than by putting guitar-heavy pop rock on the back burner to bring synths and gang vocals to the forefront? This shift in sound started last year with the release of Night People—but while I enjoyed that offering the band did not, calling it “linear” and “complacent”. If there’s one thing you can say about VI it’s this album is the opposite of complacent. It’s bold and loud but it doesn’t entirely hit the right marks for me.

Opening track “Fast Forward” eases us into this new era of YMAS. Sonically it’s similar to what we’ve heard from them in the past with the stadium-ready guitars and a throbbing bassline. The lyrics even include a callback to 2010’s Hold Me Down as singer Josh Franceschi belts out the chorus: “I might be down but I’m not fucking out”.

From there we’re in new territory. “Straight to My Head” and “Back Again” both could be played in a club setting, their sinuous riffs conjuring up images of strobe lights and foamy bubbles. Bouncy lead single “3AM” seems better suited for a dance party than an arena—if you don’t believe me, watch the video which sees the band perform a hilarious (yet cringe-worthy) choreographed dance. There’s a hint of the old YMAS on a couple of the other tracks—“Predictable” in particular offers biting lyrics and a thrumming Brand New-ish bass—but for the most part we’re in uncharted waters and YMAS is trying their best to navigate.

As a poppier album it’s not bad but it doesn’t feel distinctive enough to stand out from the crowd of other bands who have already established a similar sound. Listening to VI, I can’t help but think some songs would be better suited to other acts who have a firmer hold on the dance-pop genre: the pulsing “I.O.U.” could easily fit onto the next Don Broco album, closing track and pseudo-ballad “Losing You” is a synthesizer away from a Bastille song. VI tries to defy genres but falls short of making a lasting impression.

When you’ve been a fan of a band for a long time it can be difficult to accept how much they’ve changed over the years. I was nineteen when I first started listening to YMAS and, since I’m the same age as half the band members, I’ve literally grown up with them. My taste in music has definitely changed over the years and I don’t doubt theirs have as well. But while I respect their attempt to burst out of the pop rock bubble, I have a hard time picturing them performing these dance club-type songs—something the band seems to predict with “Fast Forward”. “The old days are gone / Everything you’ve got isn’t what you want.” For better or for worse, YMAS is reinventing themselves and, even though I personally have a hard time connecting to this new version of them, you have to appreciate their efforts to rejuvenate their sound.

Buy it, Stream it, or Skip it? Stream it. Long time fans might be disappointed by the lack of anthems but YMAS make a solid effort to move in an unexpected direction.