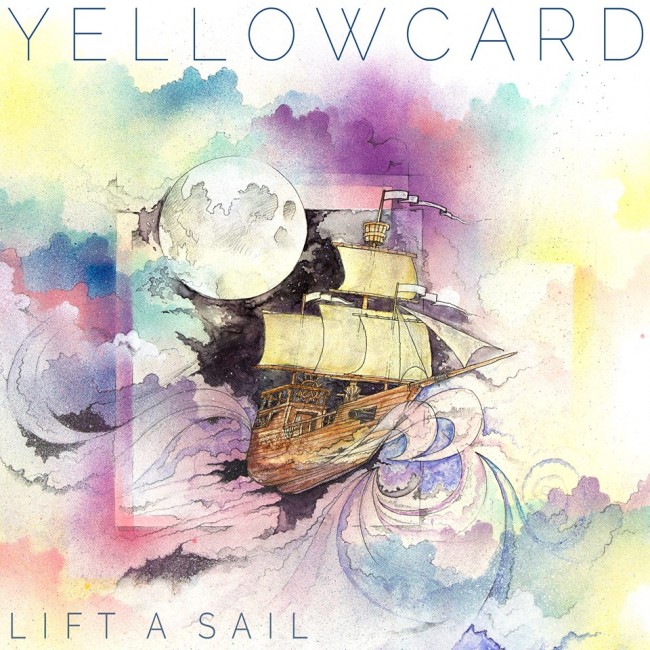 “With the last sail lifted high, I am ready now.”

It would be an understatement to say that a lot has happened since the last Yellowcard record. Violinist Sean Mackin was treated for thyroid cancer. LP, the band’s original drummer, decided to leave after 17 years. After two comeback albums with Hopeless Records, the band moved to Razor & Tie for the third. And probably the most influential incident on vocalist Ryan Key was  a snowboarding accident in which his, then fiancee, was  paralyzed from the waist down. With such a tumultuous series of events, it’s not surprising that Lift A Sail is the band’s most ambitious and experimental album yet. The band explores massive anthemic sounds and electronic instrumentation, while Key amps up his songwriting to express what he’s experienced these past few years.

Like on Paper Walls, the band decided to go with an instrumental opener. “Convocation” provides a solemn yet optimistic melody played by Mackin, hinting at the epic feel of the album–especially when the distant drums enter towards the end. The band then jumps directly into their “proper rock ‘n roll” vibe with two huge anthems, “Transmission Home” and “Crash The Gates.” Guitarist Ryan Mendez plays thick, chugging riffs over a booming backbeat provided by Nate Young of Anberlin. The lyrics of defiance and resilience on “Crash The Gates” become a common trend throughout the album and definitely stir up some Game of Thrones imagery (the show that provided the band’s intro music during this year’s Warped Tour). “Make Me So” is a return to classic Yellowcard with lighter guitars intertwined perfectly with the violin, while “One Bedroom” introduces electronic drums to the mix. Together, these four songs provide a general overview of the sound encompassing this album.

As Key’s first record as a married man, Lift A Sail contains the most love songs out of all their albums. “Madrid” is a beautifully written homage to when Key first met his wife. Another tribute to her, “MSK” (which stands for Moscow’s time zone), consists of Key pining, “I need you,” in an impressive falsetto. The instrumentation features zero drums or guitars–a band-acknowledged risky move–but the song makes up for it in the strength of its melody. But for anyone in fear of the record becoming too sappy, Key’s wife isn’t the only subject. “My Mountain” is a powerful track written from the perspective of Key’s late grandfather, who fans may know from his cameo in “Dear Bobbie” from Paper Walls. The lyrics allude to his grandfather’s ashes being scattered across the same mountain as his grandmother and Aunt Stephanie, the latter of whom has her own song, “Sing For Me,” on When You’re Through Thinking, Say Yes. “My Mountain” completes an incredible trilogy about Key’s family spanning across four albums.

Personally, it’s the big rock songs that are my favorites on this record. “Illuminate” feels like “Surface of the Sun” part two, with driving guitars as Key sings, “Our darkest days are done / Illuminate / Rise like the brightest sun.” It also once again features Key’s falsetto, something which I hope will remain on future Yellowcard albums as a sign of Key’s continued growth as a vocalist. “The Deepest Well” is another standout track, consisting of the same battle cry-type lyrics as “Crash The Gates.” It includes a prominent appearance from Memphis May Fire vocalist Matty Mullins. His higher clean voice provides a strong foil to the clear, steady precedent set by Key and the vocals mesh together surprisingly well. I’m sure many fans will be looking forward to hearing this song on the two bands’ upcoming tour together.

While the energy and emotion on this album surpass anything Yellowcard has written before, the hooks didn’t seem to receive the same attention. These songs simply aren’t as catchy, requiring several more listens to truly appreciate, when some of their older music could suck you in the first time you hear the intro riff.

Yellowcard made true on their intent to go where they’ve never gone before with Lift A Sail. Despite being around for almost 20 years now, the band still continues to challenge and reinvent themselves. These songs form an inspiring opus of love and determination that are extremely personal, yet relatable. Sonically, this may not be my favorite Yellowcard record, but one that I will still enjoy and respect that this is what the band needed to create at this point in their career in order to continue progressing after all these years.

Skip It/Stream It/Buy It: Buy it, because you will be holding Yellowcard’s heart and soul in your hands.