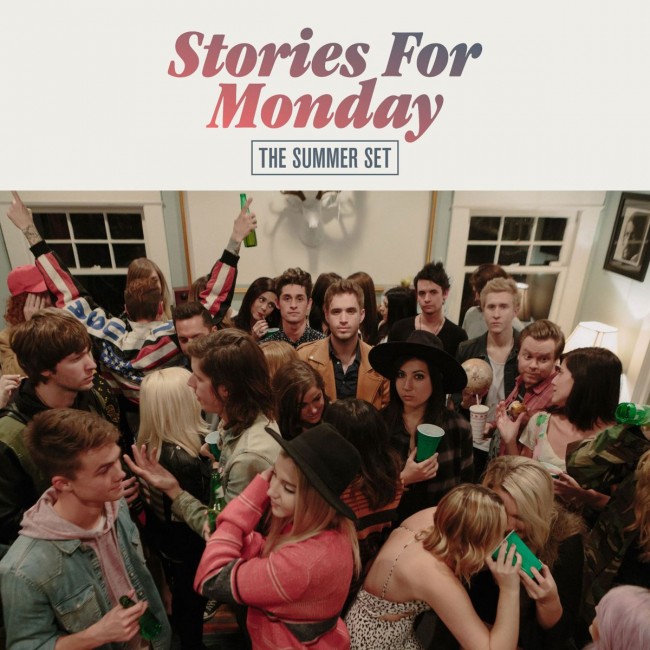 “Cause I don’t know if we’ll be here again, so you know we’re going all in.”

On Stories For Monday, The Summer Set jumped in their Impala and pressed play on the tape deck to bring back killer tunes for our millennial ears. Whether you’re headed for a night out in Los Angeles, or to a Fourth of July barbeque, bring the album, because it’s sure to bring the energy.

We should let you guys know, it’s hard for us to be critical of a band like The Summer Set because they’re one of our favorites. We own all their albums and this is their best one yet.

The band tries out a new sound on the piano centered “Figure Me Out”, but by the second track they’ve found their voice, creating their own concoction of good times, pop punk ethics, and catchy beats (we wish we could straighten our lives out this quickly IRL). “I was hiding away at my parents house in Arizona, afraid that none of the songs written for the record were cohesive and that we were missing something important, and then one night after midnight I wrote this song alone on the piano in the house I grew up in.” Vocalist Brian Dales noted. “It was cathartic and it changed the whole album process for me.”

Lyrics are an unstoppable force on the new collection, which is why whenever we put on our Jean Jackets, we’ll definitely be thinking of TSS. A killer Nirvana reference (it’s so bitchin’, we won’t even tell you what it is) kicks off instant dance-along “All My Friends”, and then they prove that you’ll be fine in any situation as you scream along to the stadium-filling track “All Downhill From Here”.

Deja vu will hit you hard on “Wasted”, the twin track to their 2013 song “Legendary”. Not hammered, or even hungover for that matter, the band does what they do best and leaves you on a hopeful note.

Stories For Monday is filled with songs and tales that make for a great conversation on any day of the week. With it, they’ve proven they’re still the pop band that fills your CD stand and provides the soundtrack to your best memories, now with the courage to be exactly who they want to be.
Buy It, Skip It, Stream It: Buy it! Turn this record on on a Friday night, and you’ll definitely have some insane stories for Monday, so go get yourself a copy.