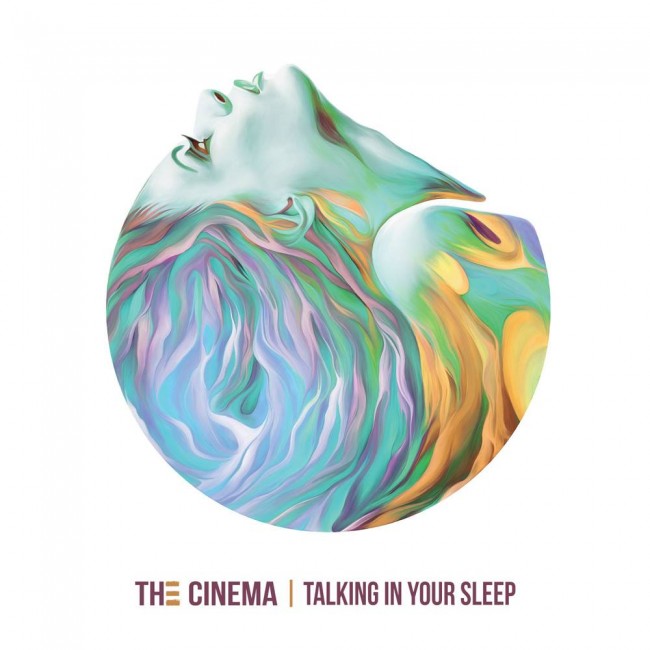 “It’s gonna be paradise. We’ll just get lost in the lights.”

Leighton Antelman loves to tug at our heartstrings. Oftentimes in a brutally beautiful way. Back in 2010 he announced that his band, Lydia, would disband after a final tour appropriately deemed “The Lydia Finale: A Goodbye & Farewell Tour.” While this resulted in many broken hearts, those hearts began to piece themselves back together when Antelman subsequently in 2011 announced the formation of The Cinema, a brainchild project created between himself and producer Matt Malpass who had worked on previous Lydia albums.

Now, fast forward three years to a glowing sophomore album from a project many people had doubts about. While The Cinema’s debut album My Blood Is Full Of Airplanes garnered positive reviews, Talking In Your Sleep crushes all uncertainties and proves this powerful collaboration, with a brazen aptitude for musical experimentation, is certainly a force to be reckoned with.

“Call It In The Air” opens the album with a bang. The catchy track bursts with infectious, pop-heavy hooks and serves as a perfect choice for the album’s opening act. While the track introduces a sound that is far removed from Lydia, Antelman’s voice is unmistakable and when he sings “I’ve got some secrets in my basement / I got some skeleton’s I haven’t seen in ages,” Lydia fans will rejoice. Switching gears a bit, the album abruptly takes a turn for a softer, sweeter song with “Turn It On,” featuring Copeland’s Aaron Marsh. The track is romantic and reminiscent of youth and reckless love, and the lyrics, dripping with desperation and urgency, feels like a heart has been taken and wrung out like a wet towel. The raw, powerful lyrics are real, man.

Next is “Crazy,” where the clearly defined pop tunes are back at it again. The beautifully executed upbeat, electronic beats created by Malpass are highlighted here. It’s remarkably different from My Blood Is Full of Airplanes, and I’ve never heard Antelman sound so happy. With this cut, It’s evident how much fun he and Malpass are having, creating a brilliantly mixed-variety catalog of music. Meanwhile, it’s with the following track “She Knows,” with its extensive combination of musical effects, coexisting with a much slower tempo that make it apparent that perhaps Antelman and Malpass can, in fact, do it all.

Serving as the second single from the album and a definite highlight in the tracklist, “Ghost” is like Lydia on drugs. The lyrics mimic that of the band who are known for their tortured lyrics and and haunting melodies.

My personal favorite, “Punchline” features ex-Lydia member and current States’ frontwoman, Mindy White mixed with heavy drums, creating a musical composition different from anything else thus far, but the album’s overall ideal and theme are still there. This is a pop album. And we like it. Antelman and White’s chemistry is, as always, undeniable, and with the addition of Malpass, the trio experiment with a unique three-person chorus. The title track “Talking in Your Sleep” in addition to “Dancing Round Me,” once again places electronic beats and pop-heavy synths in the forefront, but the best thing about this album is that there are so many surprises throughout. Even with the second-to-last track, an unexpected explosion of pop comes forth with “The Weekend” as a welcomed, pleasant addition.

The album perfectly rounds out with the last track, “Going Down,” which brilliantly showcases all of the many, even unusual, musical elements already utilized throughout the album. It’s like “Going Down” serves as a medley of heavy synth beats, piano melodies and Antelman’s impressive vocal range combined seamlessly with Malpass’ harmonies.

The Cinema really came out swinging with this one, no holds barred. Without following any rules or precedent, Antelman and Malpass have created a true work of art that is original, fun, honest and so beautifully orchestrated–unlike anything they’ve ever created before, together or individually.

Buy It, Skip It, Stream It: Buy it, because it’s an indie rock-pop crossover masterpiece.