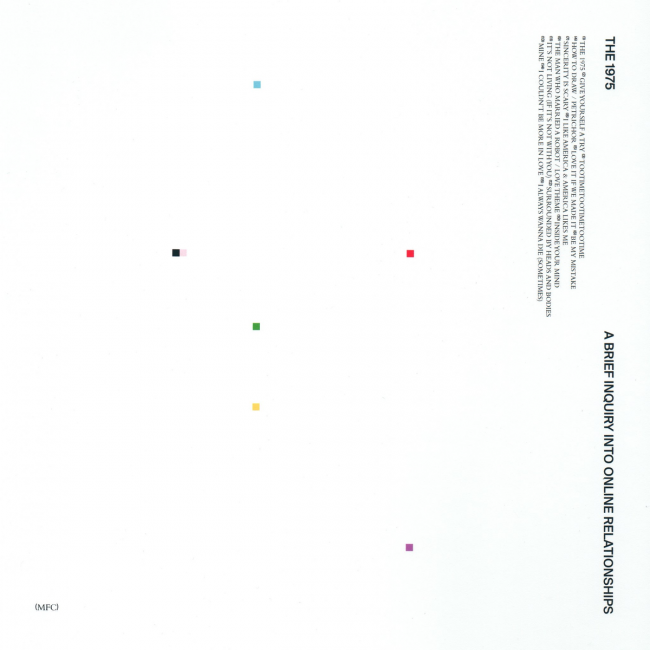 A Brief Inquiry Into Online Relationships

And irony is okay, I suppose, culture is to blame / You try and mask your pain in the most postmodern way

The first time I saw The 1975 live they played a very small venue. I watched the show from a balcony, off to the side of the stage, with a handful of other people. At one point, Matty Healy lifted his drink to salute us. Over the past five years, that venue has undergone major changes—the balcony I once stood on has been renovated and is is now much bigger and sleeker. Likewise, The 1975 has grown from a relatively unknown entity to one of the biggest bands in the world and their third album, A Brief Inquiry Into Online Relationships, is set to launch them even higher.

The thing I love about The 1975 is you can listen to the songs individually and it works but listening to the album as a whole is an experience. I think that, more than anything else, is the intention behind this outing. I can’t count the number of times I’ve jammed to poppy single “TooTimeTooTimeTooTime” since it was released in August but hearing it in its proper place— between the unapologetic “Give Yourself a Try” and “How to Draw / Petrichor” which wouldn’t be out of place in an underground club—gives it a new context.

At just under an hour long, A Brief Inquiry Into Online Relationships has ample time to play with our emotions and experiment with all types of genres. Like their previous album, we’re treated to a little bit of everything: there’s the sexy jazziness to “Mine”, the backing vocals from a gospel choir in “Sincerity is Scary”, and heavily autotuned vocals on “I Like America & America Likes Me”. Some of the tracks are a little, well, weird. “The Man Who Married a Robot / Love Theme” is a short story narrated by Siri which follows a man as he falls in love with his best friend, the Internet, until one day the man dies. Yet Siri reassures us you can still find him on Facebook. But what else would you expect from a band who managed to work in Donald Trump quotes into “Love It If We Made It”?

At that first show, The 1975 were still so new to the scene that Healy leaned against the outside of the venue and smoked a cigarette without getting ambushed by a crowd of adoring fans. Nowadays, I don’t think he can walk down the street without getting recognized. So it’s nice to hear a more vulnerable, unguarded side of him throughout the course of the record. “Be My Mistake” is a soft unencumbered ballad; Healy barely sounds like himself as he lays his emotions bare, telling us that he “feels lonesome sometimes”. He also doesn’t hold back from talking about the uglier side of fame. “It’s Not Living (If It’s Not With You)” references his heroin addiction and leads directly into “Surrounded by Heads and Bodies” which talks about his consequent stint in rehab.

A Brief Inquiry Into Online Relationships is a record that doesn’t hold back. It covers a massive range of themes and ideas, politics and religions, drug habits and the internet—and while it’s a lot to take in, The 1975 somehow make it work. As of now, I’m giving it an eight out of ten. Ask me again in a couple of weeks once I’ve had time to sit with it and I’ll probably have bumped it up to a nine. By the time their fourth album, Notes on a Conditional Form, comes out in May 2019 it’ll most likely be a solid ten. This is an album that needs to be savored, that takes time to truly get—both in terms of the meanings behind lyrics and the sudden shifts in sound—but once it all clicks together you’ll be impressed by just how clever The 1975 is.

Buy it, Stream it, or Skip it? Buy it! This third full length is both unexpected and yet exactly what we’ve come to expect from The 1975—it’s outstanding.