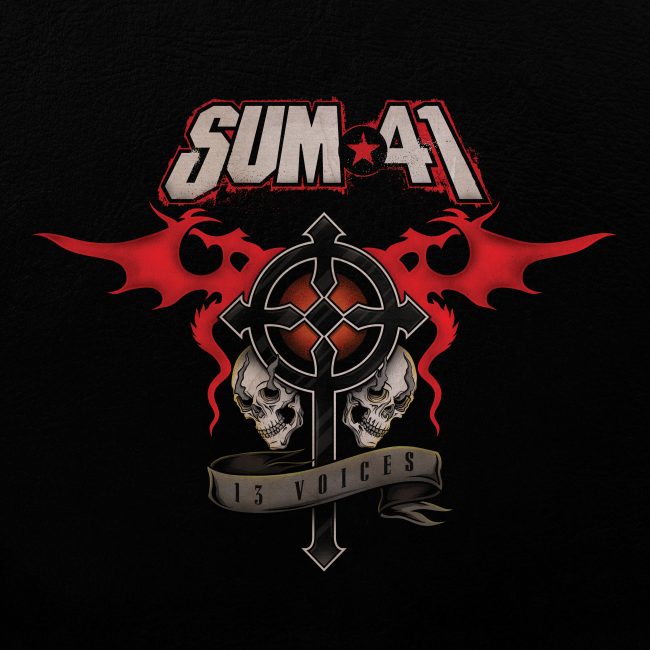 “So what am I fighting for? / Everything back and more / And I’m not gonna let this go / I’m ready to settle the score / Get ready cause this is war”

The world may be going to the dogs, but it’s a well-documented fact that in times of trouble the best—and angriest—music rises to the occasion, with fists extended to pull us out of complete despair. One band to announce their comeback to a world that has changed drastically since they last released an album is Sum 41. And this release couldn’t have been timed better; 13 Voices provides not only channels the frustration many of us feel at what’s happening today but, closer to home, it also reflects a very personal struggle for vocalist Deryck Whibley. For the past few years, Whibley has been recovering from a destructive path that left him fighting for his life. The road to recovery has been a long and difficult one, but you can hear Sum 41’s classic underdog spirit in every note.

Right from the opening track “A Murder of Crows (You’re All Dead To Me)”, prepare to be taken through an intense emotional journey. From feeling abandoned by friends, to the fight for survival, to hope for the future, Whibley’s inner demons are laid bare and turned into anthems to rally behind by heavy riffs and breakneck drumbeats. If the song title “God Save Us All (Death to POP)” didn’t clue you in, you won’t find any trace of Sum 41’s previously more pop punk sound. This is a straight up punk rock album that holds nothing back. It delivers a salvo of intense pacing with barely any respite—which at first can make the songs a little indistinguishable—but its hooks soon take root through the likes of “Fake My Own Death” and the cynical “There Will Be Blood”. The more you listen, the more layers you find hiding underneath 13 Voices’ fierce front.

13 Voices is packed full of anthems to pump your fist to, but “War” is where the album really shines: this is a battle cry for anybody going through a tough time. Listening to this record will give you a wave of pride for the underdogs, and in doing so, it really lives up to its name. It provides a voice for everyone of us who has felt alone, oppressed, or helpless. So stand up, underdogs: it’s time to fight back, and now we’ve got the soundtrack to march to.

Buy it, Stream it, or Skip it?: Buy it and stand with the underdogs.