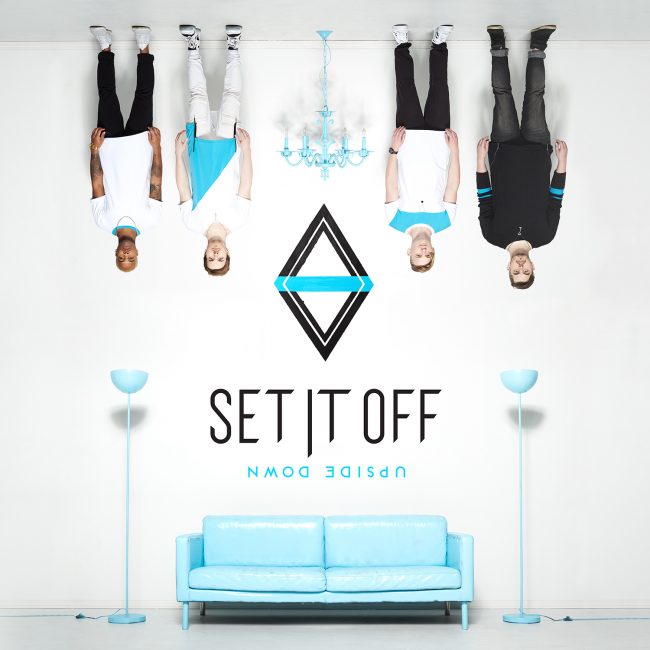 Set It Off’s third full length album is as colorful and out of control as the bounce house in their video for “Something New”, and has a perspective that can only come from viewing the world Upside Down for awhile.

Remember your favorite 2000’s boy band that still makes you turn the volume up to 11 and dance like (hopefully) nobody’s watching? Well, they’re back, they’re better, and they’ve transformed into the guys that make up Set It Off. The Florida group has seen an array of sounds since their 2008 formation, from Cinematic emo rock to pop rock sweetness. Of all their incarnations, though, Upside Down easily claimed the place of my favorite. They’ve fully moved onto anthemic pop choruses and a persona that can only come from guys with a rock’n’roll background—and there’s nothing I love more than a boy band with a little extra edge.

Set It Off is nothing but a pure party on their latest effort. From hooks that will never leave your head to lyrics that’ll lift you up even on the darkest days, they’ve taken every sugar-sweet pop cue from the boy band playbook and revamped them in a way that feels right at home in our alternative scene. Tracks that could’ve been cheesy only come off as charming and uplifting (looking at you, “Life Afraid”), proving the unbridled ~skillz~ of Cody, Dan, Zach, and Maxx.

That isn’t to say it’s all good times and better friends, though, because when things slow down on tracks like “Want” and “Diamond Girl”, the band is nothing short of moody and sexy. Heartbreak isn’t in short supply either, with “Admit It” displaying all five stages of grief, from anguish to anger, in its short three minutes—an act of true sorcery.

Upside Down is an album that’s good for any time of the day, month, or year. You don’t have to be heading out to a pool party to jam “Something New”, and you don’t have to have a few knives in your back to scream along to “Hypnotize”—but the songs will only be that much better if you do.
Buy It, Stream It, Skip It? I’m literally screaming from the rooftops, buy it buy it buy it.

Ready to listen for yourself? Tune in to our Release Day Listening Party with Set It Off themselves to catch Upside Down in full, and hear exclusive stories from the band. It all happens at 7PM ET tomorrow. See you there?