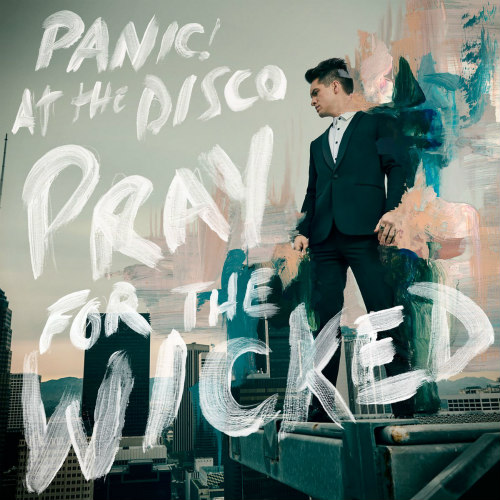 Pray for the Wicked

Had to have high, high hopes for a living / Shooting for the stars when I couldn’t make a killing

“In the garden of evil, I’m gonna be the greatest,” crows Brendon Urie in “Hey Look Ma, I Made It”. Halfway through listening to Panic! at the Disco’s new album, Pray for the Wicked, I have to say I agree with his statement.

The last time Urie released an album—2016’s Death of a Bachelor—he gave us eleven songs that included a Sinatra-inspired ballad and a Queen-esque anthem. This time around, he takes those same sounds and somehow makes them even more expansive (I know, we didn’t think it was possible either).

Though we’ve been getting little tastes of this new direction for the past couple of months, it’s impossible to prepare yourself for the intensity of Pray for the Wicked. The album opens with the now familiar jam “(Fuck a) Silver Lining” before transitioning perfectly into the equally huge “Say Amen (Saturday Night)”. And then we’re introduced to “Hey Look Ma, I Made It” and suddenly the gloves are off. Here, Urie is on fire. The smooth synth-y intro gives way to tongue-in-cheek lyrics that celebrate Urie’s successful musical career even while highlighting the not-as-glamorous parts—the record label that “pimps” him out or the fairweather friends who only want a piece of his stardom.

If “Crazy=Genius” was your favorite song on Death of a Bachelor like it was for me, then Pray for the Wicked is the album you’ve been waiting for. “Roaring 20s”, inspired by Urie’s Broadway stint last summer, is a jazzy little number with a horn section that makes you think of chorus line dancers and fluttering flapper dresses. But listen to the words and you get a sense of Urie’s very real struggle with anxiety and ADHD—a theme that is repeated later in the explosive “Old Fashioned” where he sings “We were borderline kids with a book of disorders / Medicatin’ everyday to keep the straightness in order”. Pray for the Wicked might come across as a party album on first listen but don’t let the sparkly surface throw you off. Urie gets real on more than one song, whether he’s cautioning us against the dangers of excess in “One of the Drunks” or describing what it feels like to pursue your dreams in a city as sprawling as Los Angeles on the beautiful closer “Dying in LA”.

We’ve known for years: Brendon Urie is the perfect musician. That flawless voice and killer range for one (tell me the falsetto in “Dancing’s Not a Crime” doesn’t give you chills). The fact that he played nearly every instrument on the album and managed to pinpoint the exact moments that a blast of horns or a string section would really elevate a song (thanks in part to Pretty.Odd. producer Rob Mathes). So it’s not surprising that his sixth album takes all those qualities we loved in previous Panic! incarnations and kicks it up a notch or twelve.

The only downside to Pray for the Wicked? It feels short despite being over half an hour long. Urie’s velvety vocals make it so easy to escape into a glittery wonderland that by the time the violins swell for the last time at the end of “Dying in LA”, coming back to reality is a little jarring. Thankfully, you can just keep hitting that play button over and over again.

Buy it, Stream it, or Skip it? Buy it! I could spend hours telling you why this is an incredible album, but you really need to experience it yourself.