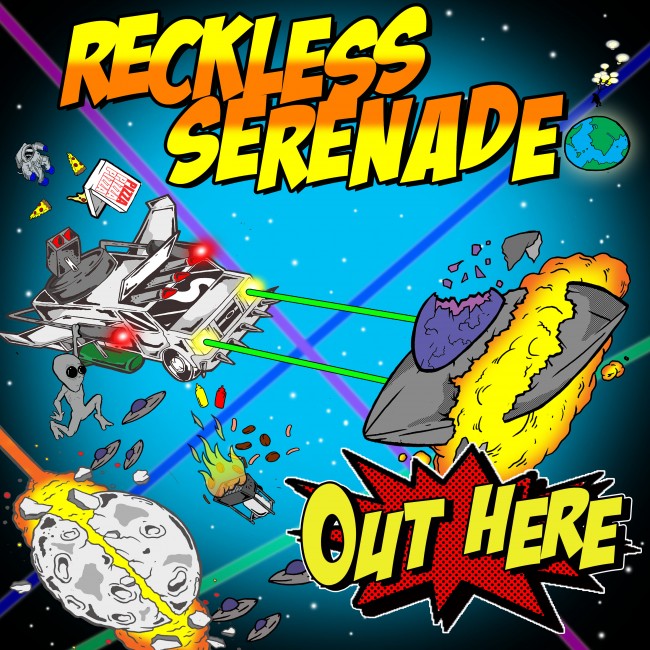 Label: Released: .. Review by Shelby Chargin | September 17, 2015 at 10:00 PM
8
Will we ever shine as brightly?
Reckless Serenade are back with a self-released EP dropping September 18th, Out Here. The EP is filled with five consecutive “stuck in your head” songs that push the limits of the defined genres in this scene. Cory Brent’s voice channels rock acts like the Arctic Monkeys–who they admire so much they named their band after one of their songs–or even The 1975, giving way to the true “emo” vibe that’s made it’s way back into our hearts over the past year. While the musical backgrounds of the rest of the band bring in a pop punk vibe that shouldn’t mix, but does.

While I’m a sucker for a great opening track, and a killer single like “Kerosene,” the second song on the EP “Overtime” hits harder. The intensity of the lyrics mix with the range of vocals, to make an addicting sound that’s made better by changes in tempo throughout the song. The rest of the EP holds up just as well. Between true pop punk anthems like “Fire” and “The Art of Letting Go”, Reckless Serenade solidifies their spot in this scene. If you’re looking for a song to help you have that perfect cry-fest, “Pretty Monster” is all things emo. With gang “woah” vocals, tempting lyrics, and a slowed down rock beat, the song has everything musically and lyrically “emo” you’d expect from an opener at a My Chemical Romance concert.

Because Reckless Serenade isn’t new to this music scene, they’ve been able to take the best parts of the music we listen to, and effortlessly combine them into an enticing EP that makes you want that next full-length now. Check out their tour dates and go see them this fall!

In the end: Definitely buy it! Release your inner pop punk emo!