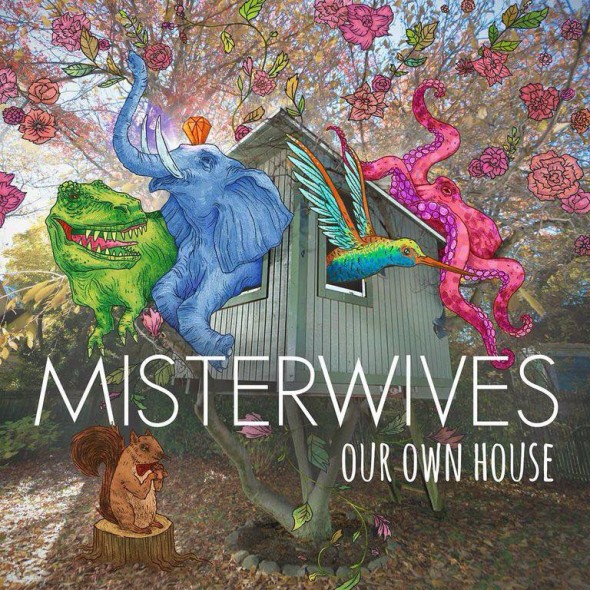 Welcome to the new-old age. Music trends certainly move in cycles, and while we seem to be reliving the dance era of the 80s and the soul-funk of the 70s, here comes a band that redefines these sounds, steps out of the repetitive spiral, and makes them completely their own. I was first introduced to vocalist Mandy Lee via her collaboration with The Knocks on the cover track “M83”–which is completely different than MisterWives’ indie-pop sound–but I instantly knew her voice could transcend all genres. And when you add in the four other like-minded, creative musicians that make up MisterWives, I was right–their debut album Our Own House mixes sweet nostalgia and originality to create a fresh, dynamic sound.

Title track “Our Own House” opens the album with the line “came in like the breeze,” accurately summing up the slow grace in which this song sweeps you into the world of MisterWives’ charm. You’ll soon find yourself clapping along to the funk-infused chorus, conjuring what feels like an explosion brilliant colors between chilled-out verses. Continuing in an overall upbeat fashion, there are plenty of synth-filled, dancefloor-ready tracks including “Reflections,” “Best I Can Do,” and “No Need For Dreaming” that you’ll have no problem immediately loving. “Imagination Infatuation” is the highlight of the party–70s-style staccato guitar riffs keep you on your toes and show off Lee’s vocal range, including her trademark squeaky twang for a chorus that’s more adorable than a basket full of puppies. Rest assured there are also a few more laidback tracks like “Oceans” and “Hurricane” that round out the album, but it’s the closing song “Queens” that proves the band has more than a few tricks up their sleeve. It completely contrasts from the rest of the album in its dark nature, landing somewhere between Sia and PVRIS–anthemic yet intimate. Save this for when you’re walking through a city and you want to feel like you own the streets.

Ever since MisterWives appeared on the scene in late 2012, there has been an incredible hype around them for having a relatively unknown name. Normally, hype is completely overrated, but in this case it’s completely justified. Simply put, MisterWives are pure indie pop perfection. Get ready for this album to be the official soundtrack of this horrid winter thawing into a glorious spring.

Skip it, stream it, buy it: Buy it–it’s the only album you’ll need this spring.