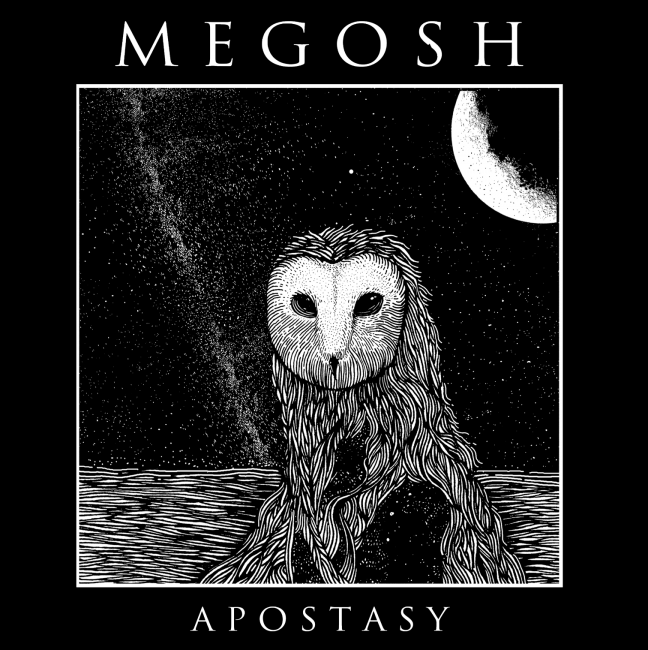 Apostasy
1. (noun) the abandonment or renunciation of a religious or political belief or principle.

Megosh is a band that keep you guessing. I was first introduced to the Baltimore alternative prog-rock group via their Story Time series, which belongs on the weirder side of YouTube (and I live on the internet so I know weird, and this gets W E I R D). So it’s only fitting that their music would surprise at every turn. Apostasy jumps from fast to slow, genre to genre, style to style, at a moment’s notice—but this is in no way a bad thing—and suddenly the album name makes sense: its songs reject musical expectations. In doing so, the music becomes controlled chaos, which completely reflects who Megosh is.

Apostasy also showcases the band’s impressive range of musicality. From the insanely gorgeous guitar solo in opener “Checkerboards & Cigarettes”, the record only sinks its hooks in further with the electronic pulse-style intro of “I Stole From the Dead”, which is somehow eerie yet intriguing, and belies the explosive nature of the rest of the song. That flair of smoke-and-mirrors theatricality will keep you on edge, detailed best in “These Go To Eleven” and “Ask Your Mother”—dramatic introductions give way to heavier beats, but still allow time for quiet, creeping interludes.

This is definitely an album listen—one where you hit play and enjoy the whole performance from start to finish. Personally it’s not the kind of music that pulls me in lyrically, and the tracks are a little hard to distinguish upon first listen; but the record is wholly entertaining—not knowing what’s around the corner. And in a time when things in the world are more uncertain than ever, it’s comforting to know there’s beauty in the unexpected.

Buy it, Stream it, or Skip it?: Stream it and prepare for surprises at every turn.