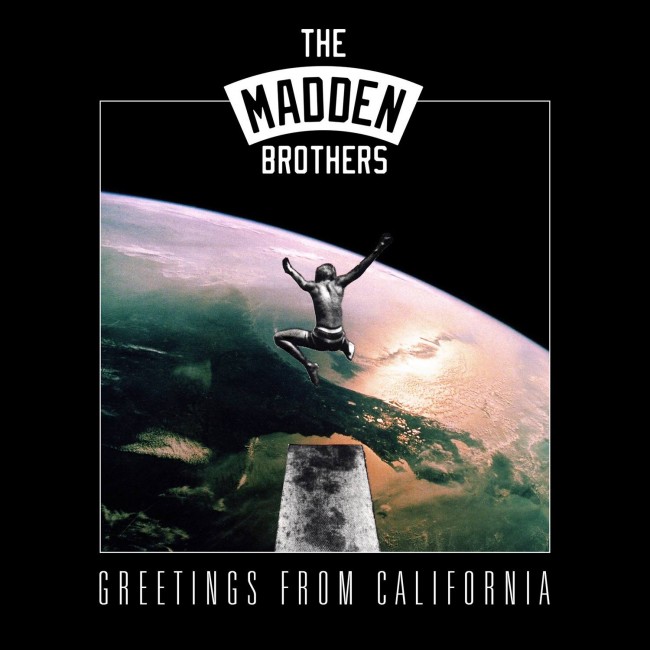 “Let me take you back before the lights, before the crowd, before we made a sound / All I wanted was to make my mother proud”

For those of us Good Charlotte fans out there, it’s safe to say most of us were apprehensive when Joel and Benji Madden announced their new project, The Madden Brothers. If you were hoping for the same glorious pop punk we all know and love, you’ll find it’s been replaced with almost everything else. But to compare The Madden Brothers to Good Charlotte would be wrong–they may share frontmen but the music is in completely different worlds. And the good news is the Maddens haven’t let us down, proving yet again they’re brilliant songwriters who know just how to hook us in, whether the genre’s pop, folk, acoustic, or anything in between. While it took over three years for Greetings To California to come to life, it gave them time to fully develop the overall concept. Its unconventional setup of two sides is almost like a vinyl record, which suits the overall vintage vibe of the album–with one side featuring some classic pop tracks, and the other side acoustic-led. And even within those vague divisions, each song brings a new influence, and a new surprise, so get ready for an adventure. If the first half is your day in the California sun, the second half is the night drive home.

A quick intro of a radio being tuned sets you up for a real nostalgic trip. “Dear Jane” then opens the album with a lighthearted air. It may be written in form of a breakup letter, but if someone wrote a song as infectious and charming as this to me, I wouldn’t be mad at all. The acoustic guitars float over the pop-y beat to keep that summery feel, and you’ll soon be transported into another era of good old fashioned rock and roll. But don’t get too comfortable, because there are more stylistic changes than Lady Gaga. “Jealousy (All Your Friends in Silverlake)” shows the more pop aspect to the album with its heavy reliance on synths and catchy hooks. This is the kind of pop song the charts need. If it doesn’t have you dancing ‘round like you’ve lost your mind, you probably have lost your mind. A song about love overcoming all obstacles, this is a true reflection of their music; it doesn’t matter whatever you think you might know about Joel and Benji, they’re redefining every expectation with each song on the album.

Side two of the album is much more heavily influenced by the likes of The Eagles, Van Morrison, and other classic rock artists. “Brother” is an acoustic tale of family ties and loss, laden with a sense of urgency, of pleading for forgiveness. As the first notes echo through the darkness, it’s just you alone with the brooding melodies. And just to reinforce that familial bond, the effortlessly perfect harmonies from the twins are unparalleled. Bringing in a harmonica to complement the solo gives it an even more rustic feel, and you’re right there where the story takes you. You don’t get more raw than here–but that honesty remains even when “Good Gracious Abbey” takes the album in a completely different turn. Starting off almost like music you’d hear in a coffee shop, you can just chill to soft, crooning vocals–until the chorus hits and suddenly you’re in full party mode. When the drums kick in and Joel begins chanting the chorus that shows the Maddens’ more rebellious side, you’ll be right there singing with him. We’ve all had that friend who suddenly became “too cool for the scene,” but leave it up to the Maddens to paint an image of this Abbey, the friend we all once knew. Despite their genre-hopping, they’ve never pretended they’re something they’re not, and that’s definitely part of the charm.

Greetings From California is a labor of love, a collection of life stories, but most importantly, damn good music. We all spend our lives dreaming of better days, and this album is the soundtrack that puts it into words. If you go into this album with an open mind, you’ll find it easy to embrace every different style they throw at you. If you don’t, then prepare to be convinced, because this is a mixtape with a song for every mood. The Madden Brothers have reinvented themselves and they’re still completely on form–proving to anyone that talent can transcend any expectation. Welcome to the new age of rock and roll.

Buy it, Stream it, or Skip it? Buy it for a whole new album experience.