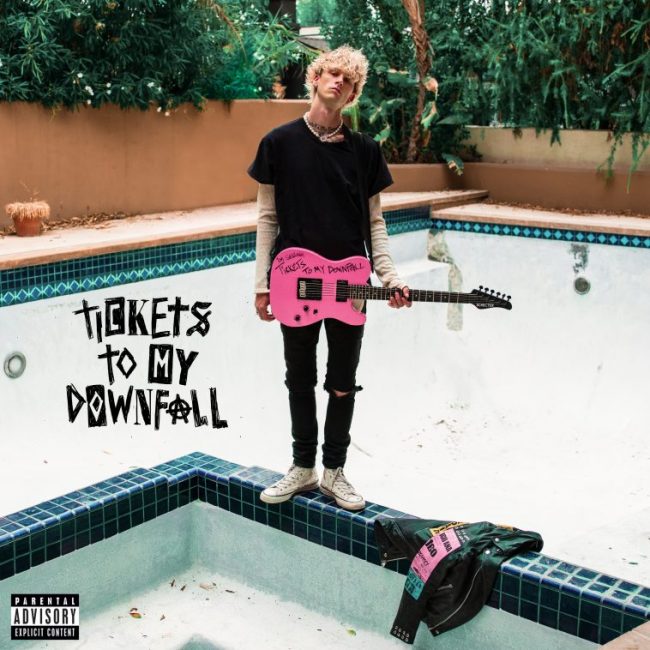 Tickets to My Downfall

“I’m 29, my anxiety is eating me alive
I’m fighting with myself and my sobriety every night.”

If you’re looking for General Admission-era Machine Gun Kelly…well, this isn’t that.

It’s hard to think of an artist completely changing genre at all. Maybe Amalie Bruun ditching pop for black metal and becoming Myrkur? But just like Myrkur, that’s what MGK has done on this album. And just like Myrkur, not only did he switch genres completely, he absolutely crushed it.

He’s still MGK but, make no mistake, this is a pop-punk album. If you were paying attention at the end of Hotel Diablo, MGK’s last album, you might have seen this coming from the final track “I Think I’m Okay”, a collaboration with Yungblud and Travis Barker whose sound got MGK thinking along the lines that would eventually create Tickets to My Downfall.

Travis Barker and MGK collaborated for months on the tracks on this album, producing a multi-toned album that is in turns anthemic (“title track,” “bloody valentine”), endearingly goofy (“concert for aliens”), and emotionally raw (“nothing inside” and the above-quoted “play this when i’m gone”). In another artist’s hands, this mix could come off as uneven but this isn’t MGK’s first rodeo (it’s his fifth) and everything hangs together and just works from the first track to the last.

For me, it’s the deeper tracks that resonate. “nothing inside”, with guest vocals from Iann Dior, sounds deceptively poppy at first listen but the song itself is gut-wrenching and dark. Lyrics like “I’m running low on serotonin in these empty moments/I’m having trouble operating without my main component” are in stark opposition to the bright, 90s-Blink-style drumbeat but, like so many songs on the album, the juxtaposition really works.

Buy it, Stream it, Skip it?: Get to your digital platform of choice and Buy it; but you don’t need me to tell you that—you’ve bought it already, right?

If you haven’t, it might be time to take a hard look at your life choices, because this one stands up there with the best pop punk albums of this generation.