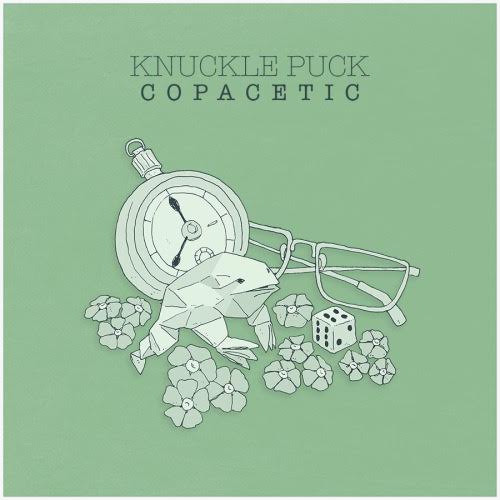 “I’ve been grasping onto pages from the book that you burned ages ago.”

After a number of EPs and supporting roles on some high-profile tours, including an unexpected stint with The Maine, Chicago pop-punkers Knuckle Puck finally released their debut album, Copacetic. Theirs is an album that needs to be listened to a couple of times in order to be fully appreciated. At first listen, it’s easy to compare Knuckle Puck to their peers: they’re a pleasantly less polished version of Real Friends or an American version of Neck Deep, a comparison that makes the most sense on “Pretense”. By the third or fourth listen, you pick up on the differences that set them apart, whether it’s vocalist Joe Taylor’s ability to move between his normally gruff voice and a crooning lament in “Ponder” (“I’ll tell you everything is copacetic”), or the ballsy move of having a four minute outro on the closing track, “Untitled”.

Songs would be in danger of blending together if it weren’t for the choruses that beg to be shouted while standing in a crowded sweaty club, particularly on “Swing” and lead single “Disdain”. Their lyrical style hasn’t changed that much from their last EP, While I Stay Secluded, but that’s not a bad thing. Themes of feeling pressured (“Constant pressure weighing down on me, It gets better, they want me to believe”) or lost or betrayed (“You had me in your crosshairs”) are familiar and relatable, and somehow manage not to feel cliched. Copacetic is a natural progression for the band who is steadily rising through the ranks of pop-punk royalty.

Buy It, Stream It, or Skip It? Stream it  the next time you’re rolling down the streets on your skateboard feeling misunderstood.