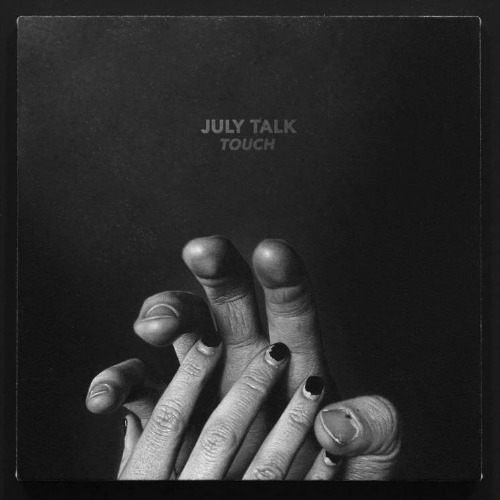 We get so tired and lonely, we need a human touch

If you didn’t know “punk blues” was a genre, you’ll learn about it with one listen of July Talk’s new album, Touch. The Canadian alt-rockers recently released an eclectic follow-up to their explosive self-titled 2012 debut which showcases a more developed sound.

Touch starts off with “Picturing Love”, a jaunty tune that immediately (re)introduces the listeners to one major element of July Talk’s sound: the dual vocalists. Peter Dreimanis’ gruff voice, bordering at times on chanting, is complimented by Leah Fay’s sultry range; together, they create a dynamic back-and-forth that makes their music stand out. While this juxtaposition can be jarring if you’re not expecting it, it’s used most effectively on “Lola + Joseph”, as the pair take on opposing roles to tell the story of the first meeting between two would-be paramours.

The album can best be described as “slinky”—there’s a lot of honky-tonk piano and disco-inspired grooves that wouldn’t be out of place at a club, especially on tracks like “Now I Know” and lead single “Push + Pull” which has an almost hypnotic quality, broken only by Dreimanis’ growling vocals. The lyrical content on this offering is a little darker than their debut—most of the tracks play with ideas of human connection in the modern age, whether through voyeurism in tracks like “Picturing Love”, or simply the need to feel a human touch in closing song “Touch”. Slow jams like “Strange Habit” detail a couple who can’t stop themselves from making the same mistake over and over, while the playful “Beck + Call” suggests the start of a new relationship. For all their talk of love, there’s a coldness through most of the songs that is probably a result of their intention to show how easy it is to lose touch with emotion, but I find it unsettling. Instead of being moved by the lyrics, I’m often put off by them and have a hard time connecting to what they’re singing about.

On their sophomore release, July Talk offers a collection of songs that speak about love, lust, and loneliness, and it’s handled relatively well by the band who aren’t afraid to be frank in their lyrics and bold in their instrumentation.

Buy it, Stream it, or Skip it? Stream it! It takes a song or two before you’re really used to the juxtaposing vocalists, and their gritty lyrics might not be for everyone, so try it before you buy it!