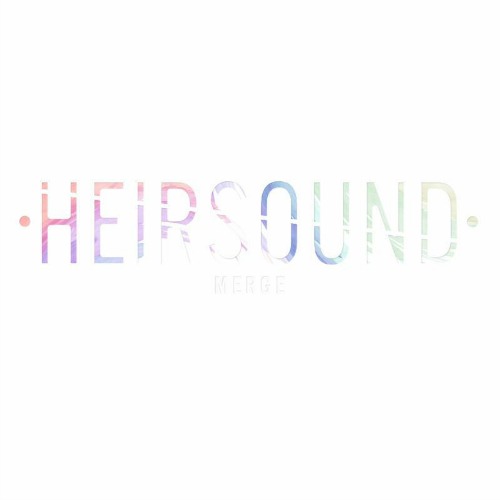 “When I yell, I have a soundless scream.”

One listen to Heirsound’s debut EP, Merge, will have you spinning the color wheel to find which shade best suits you.

The duo—former Love, Robot collaborators Alexa San Roman and Dane Peterson—present six bright, poppy songs, each representing a certain color. It’s hard to describe, but once you know which color is associated with which song, you can almost see it: the angry red of “Choke”, the emotional blue of “My Own”, the languid orange of “Slow Motion”, the moody purple of “Hoods Up”, the crisp green of “Fell Again”, and the warming yellow of “Do It Over”. Like a watercolor portrait, the beautiful melodies blend seamlessly with the dual vocals of San Roman and Peterson as they paint an emotional picture with lyrics that deal with loss and starting over. Though they use standard instruments—guitars and drums, etc—their talent is so vast, it sounds like they’re backed by multiple players. There’s a theatrical quality to their music; the vocals are ethereal while the instruments provide a solid base. You could say there is something PVRIS-y about some of the songs, “Choke” in particular, but don’t think they’re a knock-off band; they have a sound that’s all their own, and it will be incredible to let their music splash over you at a live show.

If their debut is anything to go by, Heirsound is a band that’s willing to color outside the lines and make life a little more interesting, both sonically and visually. Make sure you watch the color-coded videos that San Roman is producing for each track as well to get the full experience.

Buy it, Stream it, or Skip it? Buy it, stick your headphones in your ears, and put your hoods up as Heirsound takes you on a colorful journey to their alt-pop world.