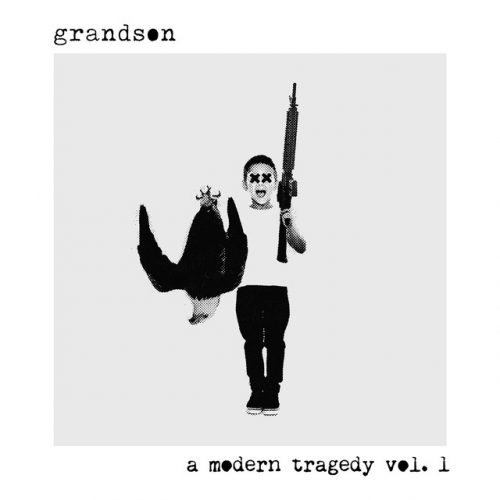 With so much turmoil in the US it’s no wonder artists have started creating provocative songs voicing their frustrations at a failing system. If Childish Gambino’s politically-charged “This is America” video got you fired up, grandson’s debut EP will inspire you to take your anger and start a riot.

Back in March, grandson released the evocative single “thoughts & prayers”, reflecting his anger after the Parkland shooting. This month, following his signing to Fueled by Ramen, grandson released his first EP a modern tragedy vol. 1. The thing that drew me into grandson was his unique take on rock and roll—there are the expected heavy guitars but there’s also the occasional bass drop that takes his songs to a different level. This mix of sounds, influenced by his previous stint as a DJ, is held up by the way grandson spits out his thought-provoking lyrics.

Lead single “Blood//Water” is a raucous three and a half minutes that hits back at corporate greed, asking what all the big shots would do if their children were the ones suffering from their poor decisions. “Stick Up” is a track that cuts right to your core. By detailing what led a man to stick up a bank grandson gives us a plausible explanation for a seemingly unexplainable action—if the man hadn’t lost access to his meds, maybe he wouldn’t have had to stoop so low. “Overdose” looks at the other end of the spectrum by focusing on the opioid crisis, while “6:00” tackles police brutality in a way that drives home just how desensitized we are to seeing tragedy on the evening news. And “Despicable” dives into a failing relationship from multiple perspectives, culminating in a suicide note and a distinct sense of helplessness.

Each song deals with heavy subject material and grandson packs a lot of emotions—anger, frustration and hopelessness—into less than twenty minutes. But he also offers a cathartic experience. If you’ve ever felt even a fraction of the emotions on a modern tragedy vol. 1, know that you’re not alone. With pounding beats and experimental electronics, this is what twenty one pilots would sound like if they were more politically-minded…and furious.

Buy it, Stream it, or Skip it? Buy it! If you’re going to listen to one angry artist who’ll help you survive today’s uneasy world, make it grandson.