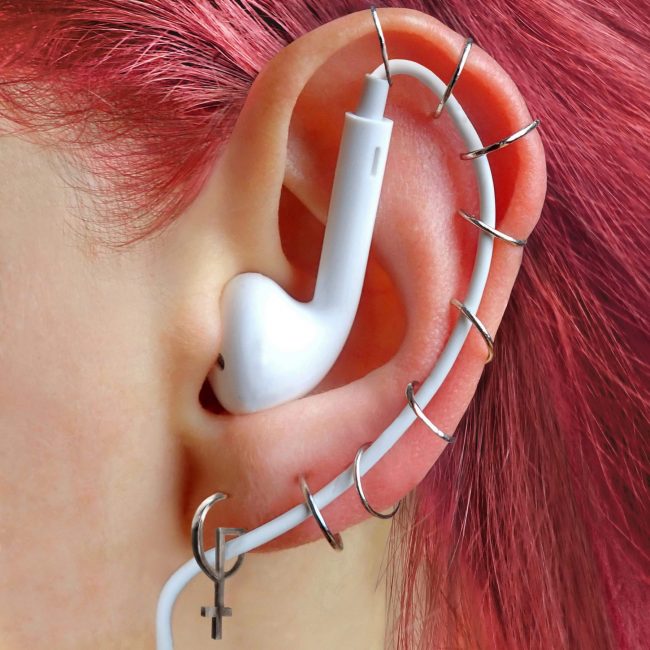 “Where were you the day it all went down?”

For vocalist Travis Mills, girlfriends is all about finding that passion again. The rapper-turned-radio-host initially broke into the music scene with his patented stretched earlobes and delectable pop rap. After taking an extensive break from music, one phone call to drummer Nick Gross set into motion a pop-punk project that would get Mills out of that rut and back into the ears of hungry streamers. It’s an environment that he strives in too well to stay out of.

Though Mills and Gross are the duo that comprise girlfriends, the band’s honorary third member is none other than legendary producer John Feldmann—a guy who seemingly flips a switch and pops out a pop punk album like he’s Willy Wonka and the music industry is his chocolate factory.

In this case, Feldmann’s production and co-writing on girlfriends’ debut album turns it into a Pop-Punk Greatest Hits of sorts. It’s got remnants of other Feldmann projects like Makeout, Allstar Weekend, and 5 Seconds of Summer. Close your eyes and you can hear Waterparks, Forever the Sickest Kids and, for the old people out there, School Boy Humor. It’s ripe with hooks you’ve heard before but can’t remember exactly where from. And still, through all of its deja vu, girlfriends is fun as hell. That’s really all it needed to be.

The perks of Feldmann’s involvement and with band member Gross—who also plays in his ska-punk group Goldfinger—is that girlfriends gets to reap the benefits of all their friends. Blink-182’s Travis Barker makes an appearance on the lively “Where Were You”, while The Used’s Bert McCracken enters an electro-pop realm on “Over My Head”. It’s the kind of starpower perfect to draw in visitors before lead singles like “Eyes Wide Open” and “California” keep them around for the rest of the record.

What is most evident with girlfriends is Travis Mills’ ability to become front and center once again—especially when pivoting to an entirely new genre. He trades a nasally hip-hop flow for a similarly nasally pop-punk croon; the latter fits his wheelhouse far better than rap did. Mills’ earlobes aren’t nearly as big these days but his ambition is larger than it’s ever been.

Buy it, Stream it, or Skip it?: Buy it. It’s only going to take a single listen for every song to implant itself in your head, but girlfriends has the kind of lasting value you’ll want to have as a permanent part of your music collection.