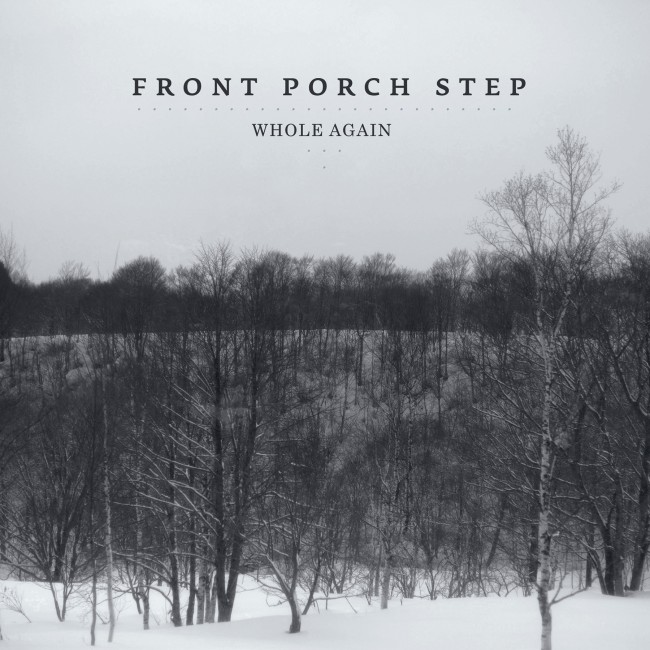 “I think that we would make a lovely mess.”

Grab a blanket, a mug filled with a warm beverage, and find a quiet place. You won’t want a single distraction from the four songs of Front Porch Step’s intoxicating EP, Whole Again.

You’ll still be cooling off your drink of choice as “A Lovely Mess” brings the collection into focus with a sound entirely its own, filled with the feeling of falling for someone. An adventurous yet comfortable tempo guides the adorably lovestruck lyrics over all the emotions of an undeniable crush.

On the opposite end of emotion sits “Heaven Sent”, a song that sounds familiar even if you’ve never heard it. Peppered with longing and regret, it’s at first a little misleading. The sweet, light strumming of an acoustic guitar hints at a love song but, before you can settle in, you’re struck with the realization it’s lyrically a heart-wrenching tune. “Whether I was right or I was wrong / Or which of us hung up the phone” escapes from the rough, pain-filled voice of Jake Mcelfresh as the song continues along its path. Meanwhile, guest vocalist Ace Enders’ smooth delivery and heartbroken aura translate into an alluring balance of hard and soft vocals.

In a way you would expect of Front Porch Step, “I’ll Be Home For Christmas” is performed with stunning ease. It was an anticipated track, as we wondered how Front Porch Step’s intense, spoken-style sound would fit into the most wonderful time of the year. One listen reveals the track meets every standard set by Christmas kings like Bing Crosby and Frank Sinatra. Everything you love about the month of December lives inside it, and you can almost feel the snow falling on your hair as it plays–even if your nearest neighbor is a volcano. Hints of brighter notes feel like Christmas lights bundling the whole thing together, and you’d be lying if you said you won’t break this track out a few times during the not so merry months.

A whispered “1, 2, 3…” introduces the sound of “Whole Again.” Starting off as a sad, sorrowful tune, it builds its way into a captivating love song. Penned about a relationship that finally grants the feeling of completion, it’s paired with repetitive chords that’ll have you swaying along. A rawness that seeps deep into your bones accompanies beautifully composed and easily quoted lyrics like “I said I wouldn’t love but you came and called my bluff.” The outro of the track shines an unexpected light of its very own, with a blues rock atmosphere and an electric guitar that couldn’t fit any better.

While Whole Again might be a quick listen, the quality of its tracks more than measures up to any full lengths released over the past few months. You won’t be able to break away from the collection once you’ve begun, and even after it wraps up, it’ll still linger with you.

Buy It, Skip It, Stream It: Buy it, or live with the regret.