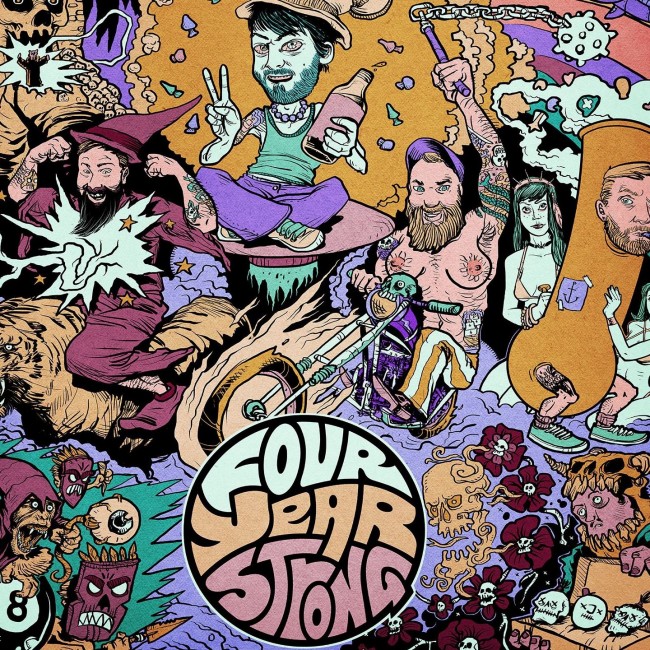 “I won’t waste my days hating myself to death.”

Easycore is a term coined by pop-punk fans that refers to a sub-genre that is a bit heavier than traditional pop-punk but not quite hardcore either. Over the past few years, the easycore genre has lost steam as more traditional sounding bands have taken over the scene. But, this summer, fans are calling for an easycore revival, and they’re relying heavily on Four Year Strong to set that in motion.

Their new self-titled album has the positivity of Rise or Die Trying, while incorporating some of the musical style and energy of Enemy of The World, arguably their two most well-received albums. And of course, the band incorporated their infamous movie references into the track list with “I Hold Myself in Contempt” from “Liar, Liar” and “Wipe Yourself Off Man, You Dead.” from “Rush Hour.”

This album is not entirely nostalgic, though. “Eating My Words” is a mellower, toned-down track compared to the rest of Four Year Strong’s repertoire, while “Stolen Credit Card!” is a heavier track on the album. The band showcases their diversity on this record, while maintaining a cohesive, unified sound that attests to their years of experience in making this type of music.

When the band first announced the track list for this album, there were some questions flying around regarding why they would decide to re-release “Go Down In History” on the album, when it was already a track on the Go Down In History EP, which came out less than a year ago. But considering the negative response to In Some Way, Shape, or Form, the song’s re-release seems to provide some continuity from the band’s redeeming EP, reassuring fans that the band’s style they have loved for years is here to stay.

This is an exciting release for Four Year Strong, and it is exactly what fans have been craving. From start to finish, this album will be blasting through your speakers all summer long.

Buy it, stream it, or skip it? Buy it. There’s not a bad song on this album.