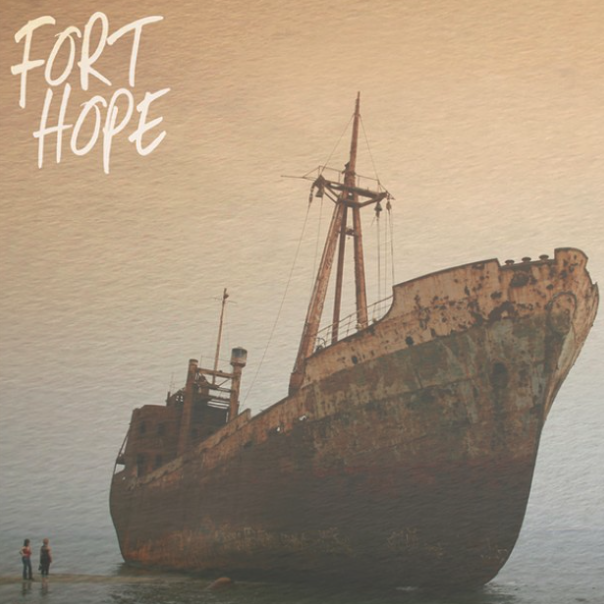 “But if we tear the kings and queens from their thrones, this night may pick up”

English rock band Fort Hope’s latest is the trio’s third EP and fourth studio release, adding to their previous efforts The Future’s in Our Hearts, Choices, and Courage. So far the band has released two singles from their upcoming self-titled EP, which features six tracks, including an acoustic version of one of the singles, and a bonus track.

Despite being so short, the collection of songs is incredibly dynamic while maintaining the feel of a collective EP rather than six separate singles. The opening track, “Crosses (And so We Dig),” opens with piano notes and almost whispered vocals, but quickly evolves into heavier guitar riffs and belted lyrics. The track even ends on what some might consider a scream.

The second track and the single, “Sick,” kicks off on a heavier note than its predecessor. The opening is more angsty than some of the other tracks on the EP, but still fits the overall vibe. As a more dynamic track, it goes back and forth between slower breakdowns and a more melodic chorus and even flows into gang vocals near the end. Being one of the catchier songs on the EP, it’s no surprise that there is an acoustic version of the song as well.

“Tears” begins with a soft piano melody, but transforms with drums and has a more rhythmic feel than other songs on the EP. About two thirds of the way through the guitars kick into gear and the song hits its peak. John Gaskin’s vocals reverberate, and the guitar has an effect almost reminiscent of U2 circa ‘87 mixed with heavier layers and drum beats, giving it a somewhat new-age feel.

“Listen (I’ve Been Trying)” and “Plans” begin to bring the EP to a close. “Listen” is strong in base and has an almost theatrical, empowered ending to it while “Plans” jumps back to one of Fort Hope’s slower piano intros that transitions into heavier base that is present throughout the song. Gaskin’s vocals contrast the lower musical tones by hitting some impressive high notes in the middle of the song.

“Sick (Acoustic)” rounds out the end of the EP and is just as good, if not better, than its full band counterpart. Gaskin’s raspy vocals compliment the acoustic guitar well, and make for a sing-along worthy track. Transitioning out of the acoustic close to the EP is the bonus track “Heart (Piano Version).” Considering the EP opened on a heavier note, it’s interesting to see it close on a softer side. The album’s change in tone from heavy to soft contrasts the elevation from softer to harder sounds that are apparent in several of the tracks.

Overall, this EP is some of Fort Hope’s best work and is definitely worth a listen. The trio have found a sound that works for them and hopefully listeners will agree. The majority of songs seem to follow the same pattern of evolution, but the rise and fall of tone keeps it interesting and manages to avoid the issue of tracks sounding too similar. Take some time out of your day to give this EP a listen.

Buy it, Stream it, Skip it: Buy it, definitely the best work Fort Hope has put out to date and worth the money.