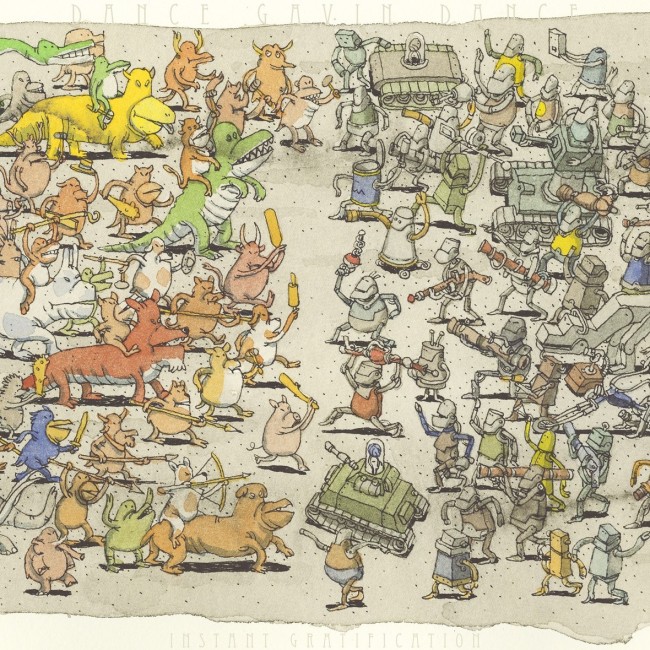 Medicate me all night long.

Seasoned rockers Dance Gavin Dance are back with their sixth full-length record, Instant Gratification, and it certainly lives up to its title. Like a raw burst of color, there’s no doubt that this album brings a fresh perspective to the genre. A sugary pop influence coupled with Jon Mess’ severely unclean vocals and borderline psychedelic fretwork, it’s clear that the band hasn’t lost a single ounce of energy since their formation nearly a decade ago. If anything, they’ve only gotten even more lively over time, opening up to new musical styles to pave the way for a new medley of sounds for the genre.

The band couldn’t have chosen a better opener than “We Own The Night,” giving you a glimpse into the hurricane of buoyancy and zeal that the record exudes. It’s an addictive atmosphere that Dance Gavin Dance have crafted, striking just the right balance between chilling vocals and escalating instrumentals. Pearson’s singing seems to glide across the jagged, pumped up landscape that Mingus puts down through his drumming, but don’t let that fool you – it goes from light and carefree to a headbanger in an instant, with “Variation” and “Shark Dad” being prime examples.

More electronic elements and even rap (as heard in “Eagle vs. Crows”) are adopted as a part of the band’s sound, and it’s surprisingly cohesive as a whole. But it doesn’t become overwhelming at any point – or at least, no more overwhelming than guitarist Swan’s seemingly frantic playing. Most notably, Pearson’s soaring vocals paired with Mess’ uncleans are more often than not the centerpiece of each song, keeping the instrumentals from becoming too heavy, and it feels like the two vocalists are delivering alternating doses of sweet lyrics that could make even the toughest of metalheads swoon, to punches of tenacity and reality that keep you grounded.

After all these years, there are a few skeptics out there thinking that Instant Gratification is simply a final soundtrack to a fading band. Dance Gavin Dance proves them incredibly wrong with their latest release, showing that they’re not only bringing “something new” to the table by embracing different musical styles we haven’t seen from the band before. It’s a record meant for the fans, for those that have stuck by the band throughout multiple lineup changes, and if that doesn’t trigger a jolt of instant gratification, what will?

Buy It, Stream It, or Skip It? Buy it; you won’t be able to resist indulging in this album again and again.