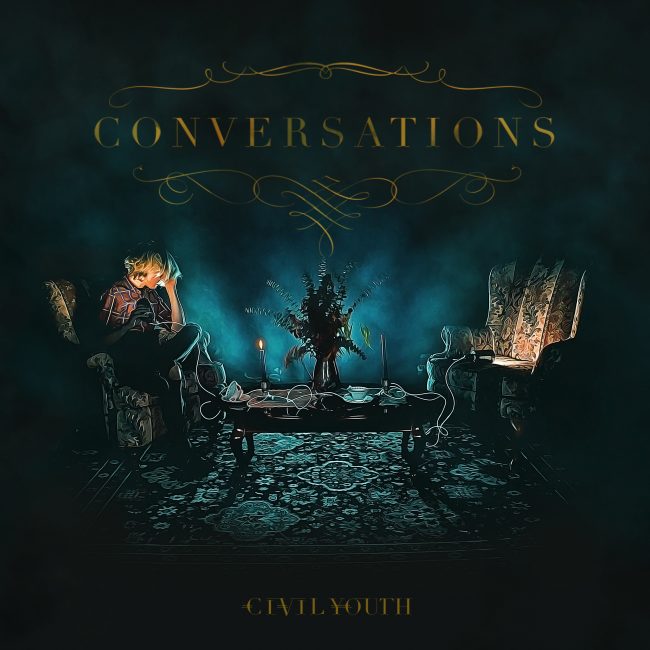 “This is my moment to break free.”

I’m the first person to advocate for Civil Youth’s potential. From the moment the Philadelphia band landed in my inbox, I’ve been spreading the word and telling friends to expect great things from their forthcoming album, Conversations. The collection is here now, and the band is still on their way to finding themselves.

There’s something to be said for the amount of ideas the guys tried in each song—they certainly left no stone unturned. In some cases, however, some editing can work for the better. This isn’t to say the potential they’ve shown is gone, it’s just a little more hidden. Adding tech elements (“Dark Debts”) to 30 Seconds To Mars arena rock vibes, then mixing that with apocalyptic rock (“Echoes”) ideas means some of the band’s skill gets lost in translation. As they grow, and learn to listen to themselves more than their playlists, their strong creative persona will become more prevalent. It’s as simple as learning to balance, and to use influences like Linkin Park as a launching pad, rather than a strict guideline.

If Conversations had been an EP containing only the last four songs, none of the above comments would be relevant. From tracks 9 to 13, we’re brought into the promising world Civil Youth can create. “Let You In” features Bradley Walden of Emarosa and is ready for Vans Warped Tour stages everywhere. Even considering an ill-fitting bridge and a few too many tech tricks, it’s the kind of song that puts a band on the map, and breeds the next Sleeping with Sirens.

When the guys take a breath and dial back their ideas a bit, their sound shines brighter. “Jaded” and “Part Of Me” display this perfectly, and prove that when CY focuses, they’ve got skill beyond their years. The final two tracks are the best offered; “Vacancy” shows a voice that’ll take them around the world, and “Conversations (These Ghosts)” wraps things up in a way that’ll have you wishing they’d just released a few more songs like this. Civil Youth might have things to learn, but they’re still the band that has what it takes to plaster bedroom walls and inspire lyric tattoos world ‘round—they just need a little more time to figure out the path.

Buy It, Skip It, Stream It: Stream It. Fall in love with the last four tracks, and look forward to watching them grow from here.