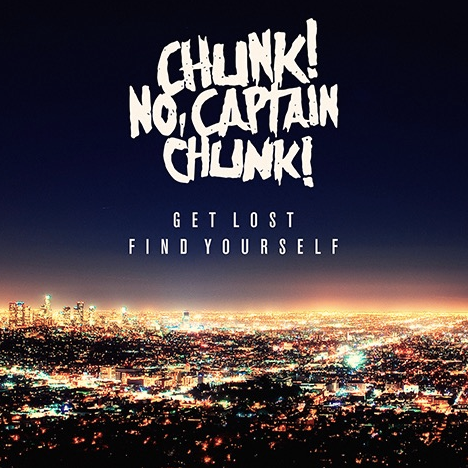 “‘Cause all this time, I’ve walked the line, but deep inside I was waiting for a sign”

On their third album, Get Lost, Find Yourself, we hear a more grown up, more pop-punk Chunk! No, Captain Chunk!. Gone are the roaring unclean vocals in every song; while the guitars still chug along admirably, the band seems to pick and choose where they want to add a heavy breakdown, preferring gang vocals to randomly placed screams.

Lyrically speaking, this is not a very creative album. The prose sometimes borders on cheesy, and every so often there are lines that don’t completely make sense. But the heart and the intention are present in every song, whether they’re singing about feeling helpless in “What Goes Around” or starting over in “City of Light.” The album, as a whole, sounds more cohesive than their previous efforts, and singer Bert Poncet sounds more confident with his abilities this time around.

One of the standout tracks, “Worst Case Scenario,” has a mellow whistling intro and an infectious chorus featuring “whoa-ohs” that wouldn’t be out of place on an All Time Low record. In fact, it’s strongly reminiscent of Sugarcult’s “Stuck in America,” but that doesn’t stop it from being the perfect summer song – fun and danceable with a head-bopping beat.

The “easycore” sound that Chunk! is known for doesn’t even really come into play until two tracks from the end with the frenzied “Twist the Knife,” which is the only song that could really be compared, sonically, to their past work. It still makes sense within the context of the album, though its proximity to the title track, a cute acoustic number (if cute is a word that can be applied to a pop-punk band), is a little jarring. But what else can you expect from a band that considers their sound to be “bipolar” (see “Bipolar Mind” from their sophomore album, Pardon My French)?

While Get Lost, Find Yourself isn’t groundbreaking in the “easycore” genre, it’s full of catchy hooks that not only make for a great summer album, but it also showcases the growth and development of the band over the past eight years.

Buy It, Stream It, or Skip It? Stream it, for when you’re sitting on the patio with a beer in hand.