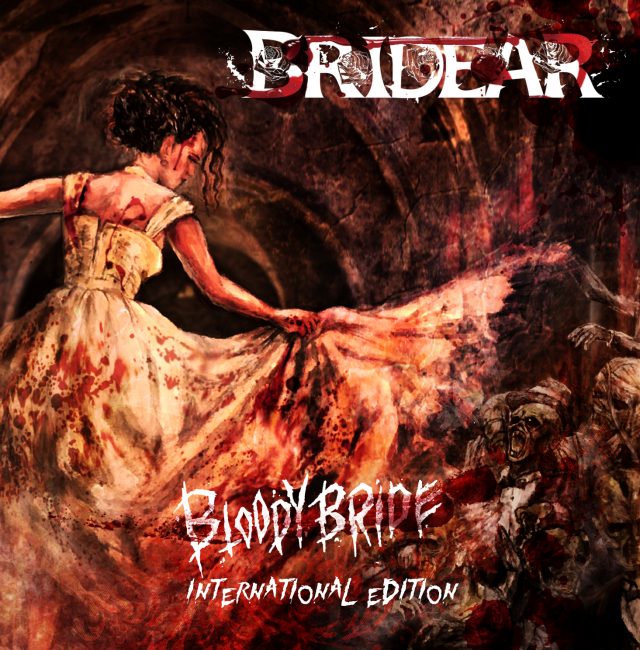 I’ve often said on my radio show* how much I love Japanese metal and punk bands. “Power” by the legendary Japanese punk band Gauze was the theme song for Metal DNA for a full year. I have vinyl from Japanese metal bands Church of Misery and Coffins, not ten feet from me as I write this. I was listening to “Orange Juice” by Guitar Wolf in my car this morning.

All of this is prologue to illustrate how shameful it is, then, that I hadn’t gotten on the BRIDEAR train until just now. I’m sure they had crossed my orbit a few times and I had filed them away into that “need to give them a listen” folder that never seems to get emptied, and that was a mistake on my part. Because BRIDEAR — especially on their new album Bloody Bride  — is a lot of fun.

The whole album has a fast-tempo, power-metal feel to it, but with a pop sensibility. It reminds me of a Blue-Blood-era X Japan vibe, if you took the “Blue Blood” single and kept up that energy level for the whole album. It’s frenetic and moves at a breakneck pace but it’s accessible and wants you to come along for the ride, not be run over by it.

The title track is a real standout, synths giving way to crashing drums and excellent guitar shredding. The longest track on the album, it’s definitely one you want to hear a couple times with headphones, because you’ll find new layers and depths on subsequent listens. The soundscape is rich and dense, but it doesn’t feel overproduced in the slightest.

The album doesn’t slow down often but when it does it picks the perfect time. “Ashes,” the halfway point, starts off in 80s power-ballad territory before kicking up the tempo a bit, clearing the way for the second half of the record while still giving you a bit of a breather.

And you’ll need it, because right after it ends, “The Moment” starts with a Teutonic synth hit and some death growls alternating with clean vocals that reminded me of iwrestledabearonce. It’s a jumble of different influences in one song that somehow all work together.

In fact, you could use that last sentence to describe the album as a whole (so I will). It’s metal but with a pop sensibility that’s been lacking from a lot of heavy music releases lately. It shares some DNA with the New Wave of Traditional Heavy Metal movement here in the US, but also forges its own path. I get the feeling that, as I dig deeper into the BRIDEAR catalog, I’ll find this is a band who makes the music they want to hear rather than trying to fit neatly into a sub-genre.

And good for them — because it works.

Stream it, Buy it, Skip it?: Buy it. I’m not sure what the story is on physical releases internationally just yet, but it’s definitely available on the digital platform of your choice and definitely worth picking up, as you’re going to want to listen to this one multiple times.