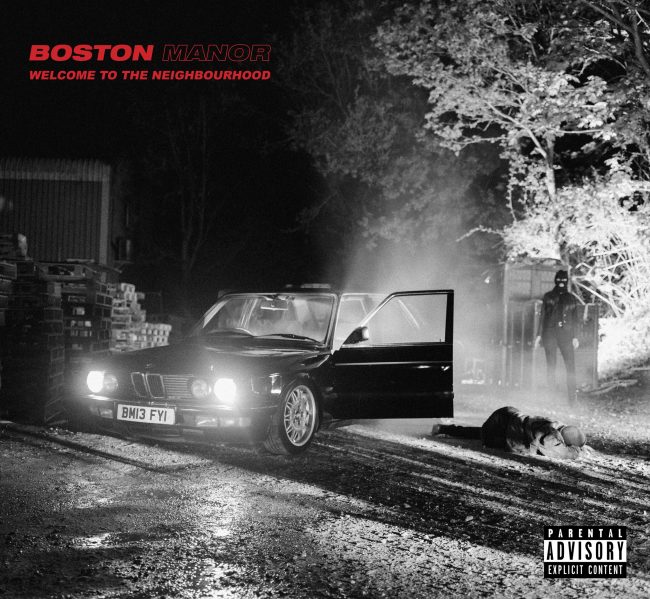 Welcome To The Neighbourhood

It’s no secret that musicians influence other musicians, who go on to construct pathways for even more musicians, and the cycle continues. Boston Manor’s second full-length, a follow up to 2015’s Be Nothing, is a prime example of this beautiful trend. Groups like Nine Inch Nails, Failure, and Deftones seem to have shaped the English outfit into a band who lives and creates in 2018; as opposed to those who are trying to emulate what pop punk was back in 2007.

Welcome To The Neighbourhood begins with its title track, an eerie warning of a welcome that bounces from a slow crawl to an upbeat chant. “This is what it’s all about” is sung like a cautionary tale for the album; pay attention to these themes or risk getting lost in the reveal. I predict “Welcome To The Neighbourhood” will be a staple when it comes to opening shows.

Welcome To The Neighbourhood’s lead single “Halo” shows up early in the album. The dreamy yet dramatic synth track is the type of single we wouldn’t have heard from the band previously. Songwriter Henry Cox has given credit to Nine Inch Nails for the band’s inclination towards more of an electronic approach to songwriting, which is evident from “Halo” and forward. The breaks between verses and choruses, as well as the musical tornado at the end.

There’s no need to feel too nostalgic as “England’s Dreaming” brings us back to the Boston Manor we all fell in love with during the Be Nothing era. “You’re not my friend / You’re not my kin / You’re not my goddamn anything,” prefaces the chorus as a chant of “bury me” fades in and out throughout the song. Most people write love letters to their SO’s, to their homes, to the friends and memories they love… Not Boston Manor. What’s the opposite of a love letter? A chaotic beat-driven track with a classic tempo change.

Songwriter Henry Cox has given credit to Nine Inch Nails for the band’s inclination towards more of an electronic approach to songwriting, which is evident from “Halo” and forward.

The modern style of writing on this album leaves little room for the criteria of classic pop punk, like catchy choruses and quick tempo changes. Leave it to Boston Manor to make room within the chaos. “Hate You” is another song that will be a live staple. A quick verse tempo and theatrical pre-chorus leads into an even more dramatic chorus. A harsh “I hate you, you hate me… We ain’t going nowhere” will be quite the sight during a live performance. While the rest of the tracks on Welcome To The Neighbourhood seem to be written about past heartbreaks and trials, “Hate You” is one of the few that seem to present a current problem: A stalemate in a relationship that just isn’t going anywhere.

With “Stick Up” I have to admit I was sold on the track within the first verse, “I feel alive but I’d rather be sane / They’ve got everything locked in a safe / I just want what’s rightfully mine / I shouldn’t have to beg you to survive.” Another anthemic track fueled by anger and a desire for a life devoid of “decay and disease”. Though “Stick Up” comes off as violent, the root of the songwriting is in a will to live. The track is a plea for change.

The final song on Welcome To The Neighbourhood is a much needed breather, perhaps one that could have been placed earlier in the album despite the popularity of closing records with slower tracks. “The Day I Ruined Your Life” is an ode to a lost love, one the narrator chose to let go. What starts out as a guitar ballad slowly molds into what we’ve been hearing on the rest of the album. The drums kick in late in the song, the guitars turn from acoustic to electric, and the vocals pick up their intensity. This dramatic change in songwriting further intensifies the heartbreak the narrator is portraying. “The Day I Ruined Your Life” fades back into the acoustic riff to close out the album.

Welcome To The Neighbourhood definitely avoids the sophomore slump tendency. It’s an album you throw on while you motivate yourself to get shit done, but more importantly it doubles as a game changer for the band’s career.

Buy It, Stream It, or Skip It? Definitely Buy It. Soak up the glow while you can, catch them on tour with Real Friends, Grayscale, and Eat Your Heart Out this fall!