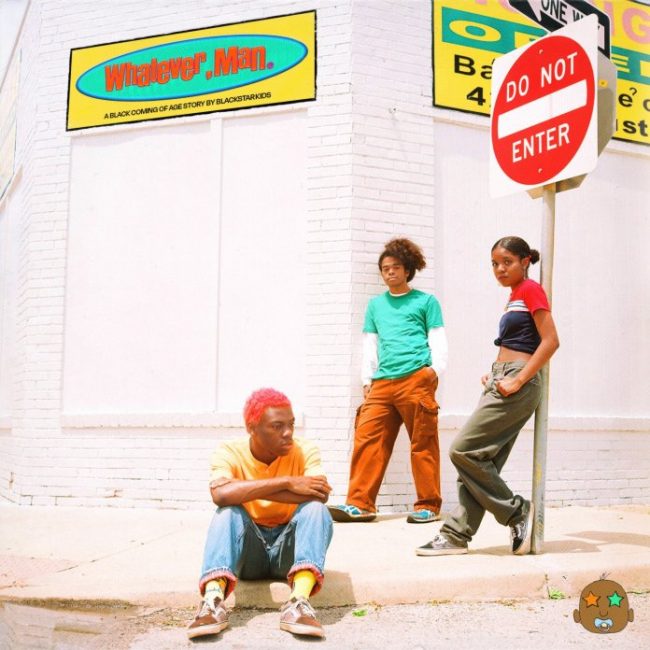 Lose my mind in a second

I don’t remember the last time I just didn’t know what to make of an album. Most of the time, I either like a record, don’t care for it, or can see where it will grow on me. After my first full listen of Whatever, Man—from Kansas City’s BLACKSTARKIDS—I was left asking myself, “Wait… did I like this?”

Maybe some of my confusion stems from the fact that the genre into which I would place this album shouldn’t exist. I’d call it experimental pop, which is a contradiction in terms; pop music is bright, sunny, and almost universally liked, and experimental music can be obscure, difficult, and weird. Whatever, Man has elements of, well, all of that. It’s bright and ear-wormy but it’s also weird and obscure. Trying to track down all of the influences that went into this production would be madness, as genres and eras are smashed together on every single track.

It should be a mess but it’s not. It actually really, really works. A song like “DEAD KENNEDYS” recalls all sorts of disparate genres, from hip-hop to punk to bubblegum pop, but it all hangs together to make a song that’s not only great, it’s infinitely replayable. “FRANKIE MUNIZ” is another of those standout tracks, one you find yourself nodding your head along with…even though you’re aware somewhere deep in your mind that, while you find this song comforting and familiar, you really haven’t heard a song like it before.

Experimental music can be hard to get into; just ask anyone who tried to listen to Swans or The Body without knowing who they were first. BLACKSTARKIDS are doing some weird, experimental stuff on this album but it’s not inaccessible at all. There are enough familiar elements to get you acclimated to the truly strange and interesting stuff in each song.

This is a band with a fascinating set of influences combined into a sound that evolves as you listen to it. I’ll be one of the first in line to find out where they go next, because after a couple of listens, I could answer my initial question:

No. I really liked this.

Stream it, Buy it, Skip it?: This is one where you need to Buy it and let it work on you, especially if you’re one of those (like me) who digs genre-busting experimental weirdness.