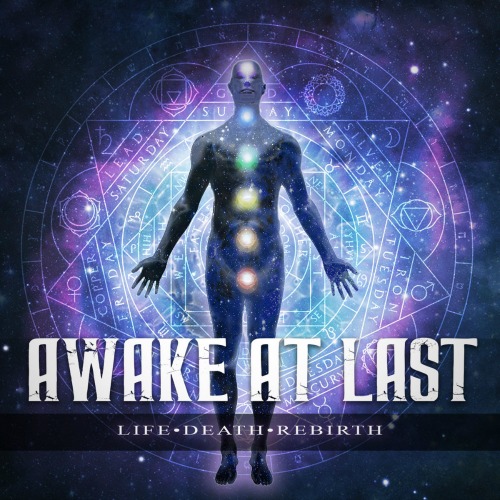 Concept albums can be difficult to pull off. Either the theme is too vague, or there’s a lack of cohesion and it falls flat. Not so with Life/Death/Rebirth from Delaware-based Awake At Last.

A cocktail of theatrical rock and post-hardcore make this EP a concept album that really works. Each song “navigates through the different aspects of human personality and consciousness” ultimately introduces us to a redemption arc that feels like it’s straight out of sci-fi TV show. From the eerie opener “Purgatorium” that sounds like a metalcore version of an early Panic! at the Disco song to the alt-rock closer, “Reflections”, Awake At Last takes us on a journey full of haunting melodies.

Certain lyrics are repeated in more than one song to really tie them together—“we either care too much or we don’t care enough” comes up in the vaudevillian “White Rabbit” as well as “Reflections”—while the rest of the words evoke dramatic images: “Dark Waltz” sounds like it could be the song version of a Neil Gaiman graphic novel revolving around a difficult relationship. Vincent Torres’ soft vocals combined with the chugging guitars and intricate instrumentation make Awake At Last an impressive force to be reckoned with.

For a small, independent band with no label support, it’s surprising how polished it sounds—for the most part, Awake At Last has a sophisticated sound that makes them seem like scene veterans.

Buy it, Stream it, or Skip it? Stream it! For a concept album, it’s easy to digest and will inspire you to look up Awake At Last’s past discography to connect more pieces of the puzzle.