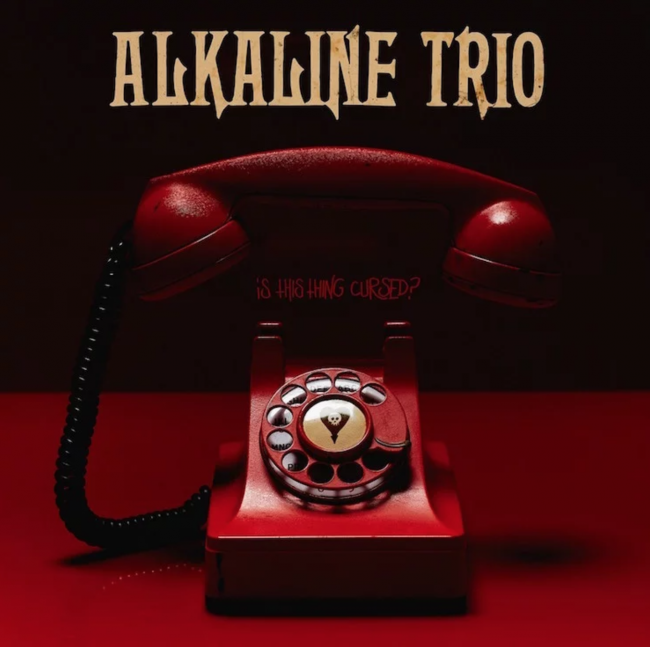 Is This Thing Cursed?

“If there’s no reason to believe in anything,
why not bring violence and throw yourself to the lions?”

For five years, the world fell eerily silent from the loud, anthemic, and dark qualities produced by Alkaline Trio. As a band, they conquered the emo world throughout the early and late 2000’s, crowning themselves as the princes of darkness. However, they’ve renewed their throne with their ninth studio album Is This Thing Cursed?. The album is a current-day masterpiece which covers many topics—from losing faith, being swallowed by the darkness of depression, to attempts at recovery—and is perfect for a broken soul.

Tracks such as “I Can’t Believe”, “Heart Attacks”, and “Throw Me to the Lions” are dynamic works of art with Matt Skiba’s voice projecting, carried by fast guitar riffs. Each song is equally dramatic, giving you the urge to rock your head back and forth with the creative flow of the tracks. While Is This Thing Cursed? maintains a creative sense via synths, guitar breaks and signature drum chops by Derek Grant, the album has the familiar feeling of the band’s 2013 record My Shame Is True. Regardless of the familiarity, the aforementioned songs exemplify what it means to hurt and the inclusive feelings that surround it.

Arguably, “Feed Me to the Lions” is the most powerful song of the album. This track is where Skiba explains how once you lose your faith in god, everything seems pointless, why not throw yourself to the lions? It’s a perfect song to exemplify what it means to feel lost and indifferent. The song’s dark meaning is disguised behind fantastic guitar riffs that seem almost uplifting; almost like there’s a smudge of relief. “Feed Me to the Lions” builds you up and makes you feel like it’s okay to feel a bit lost here or there.

The album isn’t all about the unholiness of lost faith and depression, as there’s also a dark love song mixed into the fold. “Sweet Vampires” is a ballad about finding love and forgetting everything bad you’ve experienced. The lyrics explain, when you feel pain with someone you love, it makes it all okay. If you find your sweet vampire and live forever together, the pain might be just a little more sweet than bitter.

Overall, this album is a gift of songwriting from Matt Skiba. It’s well crafted with emotion and darkness but within that void it gives a feeling of solidarity. As if we need gloom to survive our daily lives and deal with it head on. It’s a serious album with mature songs that make pain a normal entity. It’s a significant message, especially coming from someone as emo as Skiba himself.

Is This Thing Cursed? might go down as one of the top albums Alkaline Trio has written. From the dynamics of the guitar riffs, dark lyrics hidden with lighter tones, to the overall message, it’s an opus to be remembered.

Buy it, Stream it, or Skip it?: If you love shadowy artwork and memorabilia from one of your favorite bands, Buy a tangible copy of this album. If that’s not something for you, Buy it and Stream it. The more I listen to this album, the more normal I feel in times of distress.