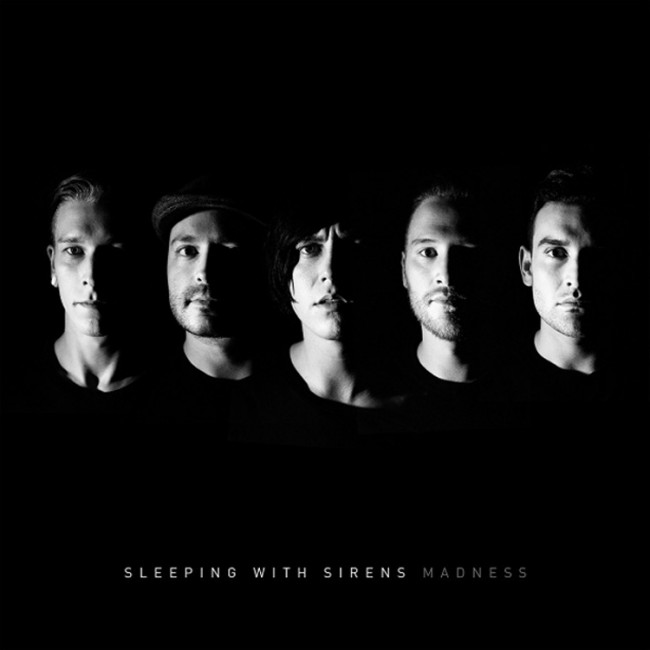 “I remember my dreams and how fun they seem.”

Sleeping With Sirens are anything but unknown in today’s music scene. With the buzz from their last handful of releases never quite dying down, and the excitement over a new release only building with every moment, there aren’t many people who haven’t heard talk of the Grand Rapids, Michigan born quartet. Since their last release, the band have been through a line up change and plenty of growth, but with Madness, they’ve only proven they’re still swinging just as hard.

Jump into the collection with “Kick Me.” A track worthy of its radio single standing, it’ll prep you–and psych you out for the onslaught of pop rock infused hardcore tracks to come. The kickass introductory song is important enough to make skipping it feel like missing the first few chapters of your favorite novel.

It’s summer, the sun is falling quickly beyond the horizon, and you’re accompanied by the hand of someone you love, with a soundtrack made up of “Gold.” Imagine the scene, and live in it for the next three and a half minutes with emotionally charged vocals and an adventurous yet sweet beat by your side. A hook filled chorus and a slowly fading outro complete what’s one of the best songs on the record.

The album closes out with “Don’t Say Anything,” a pop punk tinged rocker complete with the signature line of the genre, “I hate this place.” The hard edge the band breaks out earlier in the album lurks on the edge of the song, but never quite breaks through. An undeniably lovable chorus sings more of a rock tune before breaking into yet another chorus filled with pop-punk greatness that’ll leave you wondering what a Sleeping With Sirens/Cartel super group might sound like.

It’s a rare feat to release a record as amazing as this. Madness is an album that will leave a permanent mark on your heart, and your record collection.

Buy it, Stream it, or Skip it? Buy it twice, you’ll wear out the first copy.