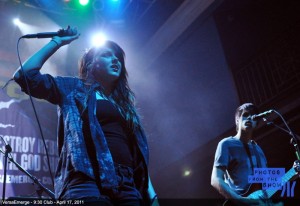 WASHINGTON, DC- The sun was still high in the sky when the Alternative Press tour rolled into DC on April 17. Doors were at 4 p.m., and the opening band, Conditions, was on-stage only 30 minutes later.

“They should call this the 4:30 Club,” Conditions frontman Brandon Roundtree quipped, referring to the venue’s name, the 9:30 Club.   And certainly, it was a bit odd to be rocking out to bands like Black Veil Brides and I See Stars on what was essentially mid-afternoon on a Sunday. But that didn’t stop a good sized crowd from showing up anyway in what is one of the biggest tours of the spring.

Conditions opened the show, the Richmond-based band battling through illness. It might have been a combination of the band feeling under the weather as well as the early start time, but the energy and enthusiasm level felt a bit off and was certainly not what audiences have come to expect from a band like Conditions. That’s not to say the band phoned it in–there was certainly massive effort and heart from Roundtree as he tried to rally up the crowd.

Conditions did manage to get into a good groove by the end of their set, absolutely rocking their last song, “Better Life,” the first single from their album “Fluorescent Youth.”

Next was VersaEmerge, who seemed like a bit of an oddball on this tour in terms of genre, but the band definitely impressed regardless. Special admiration goes to singer Sierra Kusterbeck, whose wild-eyed antics carried the energy level progressively higher and higher as time waned on. Kusterbeck was constantly dashing from one side of the stage to the other, hair whipping into a frenzy before sprawling out on top of a monitor melodramatically.

The crowd really started getting amped up by the time I See Stars hit the stage.   The audience started moshing and headbanging in earnest now, clearly enjoying the Michigan band. “Big Bad Wolf” was a particular crowd pleaser, bringing most of the crowd off their feet.

I See Stars’ set ended on a rather odd moment as one of the vocalists prefaced their closing song with a lengthy appeal to save the music industry and support bands by buying a hard copy of their albums rather than downloading them from iTunes. The speech was met with a general populist response, the same as if he had just shouted: “What’s up, DC?”, but it certainly took the energy level down a little. Granted, it’s a good message, and I thoroughly applaud the effort, but it just seemed a bit out of place in the middle of all that headbanging.

D.R.U.G.S. (Destroy Rebuild Until God Shows) was magnificent. The side of the stage could have literally been on fire and the crowd wouldn’t have been able to tear their eyes from the performance being put on by the high-powered crew. The crowd might have been amped up by I See Stars, but by the time D.R.U.G.S. got into their groove onstage, the very walls of the venue were shaking with the force of the crowd jumping to the music.

Frontman Craig Owens put on an extremely charismatic performance, but by no means was it a one-man show. Every member of the band had an incredible energy level that was absolutely infectious. And the crowd loved it. Owens in particular threw himself into the performance, jumping across the photographer barrier and hanging over the crowd on the edge of the metal barrier. The only thing keeping him from falling was a member of the security personnel clutching Owens by the belt of his pants, and it was an entertaining sight as Owens leaned precariously out further and further out into the crowd, pulling his pants lower and lower until most of his neon pink underwear was on display.

D.R.U.G.S. entertained with a lively rendition of “Sex Life” and “My Swagger Has a First Name,” the former song even containing a hilarious stage dive by a member of the crowd. The band’s traditional “Wall of Death” crowd routine sputtered out anticlimactically, but overall the atmosphere was amazing–furiously fast-paced and fun. It’s worth noting that this was the first show a lot of the bands in the lineup had ever played in DC, and they certainly won over a lot of new followers on this visit.

The headliner, Black Veil Brides, displayed thrilling showmanship. Everything was just a little bigger, louder, more dramatic. The bass was cranked high enough that the first note literally shook the air. The members’ costumes were outlandish and their makeup elaborate. The band, quite simply, put on a show.

But there was something odd about Black Veil Brides’ set. While there were certainly plenty of absolutely die-hard fans pressed body-to-body against the metal barrier of the stage, jumping and moshing to the set, the crowd was only about a third the size of the one that only half an hour ago had been rocking out to D.R.U.G.S.   For whatever reason, the crowd thinned out significantly, although perhaps it may have been in part because a few of the opening bands were outside the venue hanging out and doing signings.

But there was nothing lacking from Black Veil Brides’ performance: the band was theatrical, raucous and wild. BVB fans certainly enjoyed themselves, and the level of crowdsurfing, which had been growing steadily with each act, culminated in a high during the Black Veil Brides’ masterful performance.

The sun eventually did set–likely sometime in the middle of the headlining band’s set–which qualifies the assertion that the Alternative Press Tour was an unforgettable night of music for the DC area.