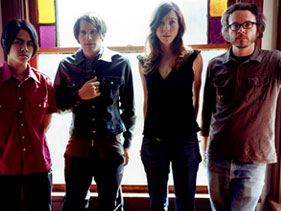 When the Silversun Pickups were writing “Swoon,”  the follow-up to their breakout “Carnavas” album, they were given access to parts of the universe where mere mortals dare not tread. And they soaked in them.

“We were on jets that landed on hovercrafts that rolled us onto Jacuzzi-shaped planes,” frontman Brian Aubert laughed. “And on one Jacuzzi plane, there was a submarine, and that was the VIP, and that was going crazy. And that’s where we wrote the album. We wrote “Swoon” on the backs of hookers. In crayon.”

He’s kidding. But there’s no denying that the past few years have been fairly eventful for the Pickups, who rose from favorite sons of Los Angeles’ Silver Lake district to the show-stealing gigs at Coachella and Lollapalooza, based largely on the buzz generated by “Carnavas,” a blurry blast of My Bloody Valentine shoegaze, filtered through the Smashing Pumpkins hit machine.

Two singles from the album hit the Billboard Modern Rock chart, and before they knew it, the band had adopted a rather robust (and decidedly non-indie) fanbase. Of course, they weren’t aware of this, as they spent the majority of the time touring in a tiny white van. But their friends back home certainly let them know that suddenly, the Silversun Pickups were a big deal.

“The best analogy for it is getting fat. Like, all of a sudden, your pants are a little tighter. It sort of gradually happened,” Aubert said. “We weren’t home for two years. Your friends sort of let you know that you’re getting big – they’ll call you and go, like, ‘We just saw you on TV. That was so strange, and you looked weird,’ but we didn’t really notice. We knew we got to tour, and we were going to all these places, and that was, deep down, pretty stunning to us. Like, there’s something inside us going, ‘What the hell is going on?!?'”

So when it came time to get to work on “Swoon,” (due Apr. 14), there were certainly a lot more people paying attention – which is why they holed up in Hollywood’s Sound Factory studios and tried very hard to forget about the outside world. That could either be a good or bad thing.

“There are people who either really hate this record or really like it. I mean, it’s nice that people will hear it. How they feel about it is up to them,” Aubert smiled. “An album is sort of a time capsule of who you are and who you were when you’re writing it. And after two years goes by, you’re not in the same place, and this is a different sort of universe that you’re in. So, really, our goal was just to make sure that at the end of the day, if it completely fails, it’s not our fault. As long as we’re proud of it, that’s all that matters.”

We’re willing to bet that Silversun Pickups fans are going to like it a lot. When MTV News spoke to the indie rockers, they were in the finishing stages of mixing “Swoon,” an album that sounds an awful lot like the title implies. We’ll have more on the songs of “Swoon” on Wednesday – including snippets of a few tracks – but until then, we figured we’d leave you with the album’s track list … and one final thought from Aubert about the making of the record. We think it sums the entire project up nicely.

“When people come up to us and ask, ‘How’d you do that?,’ we just sort of scratch our heads and be like, ‘Pfft? I don’t know.’ We just got lucky,” he said. “And all you can do is try your hardest to make the best album you can, and then, if that happens, that’s nice. Like, you have to be ready when the luck hits, and I think we did that here. There, I think I just blew your minds.”