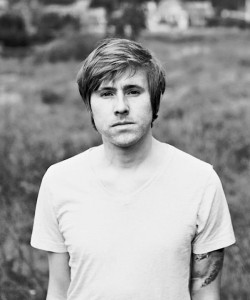 We sat down with Lydia frontman Leighton Antelman in Toronto to talk about their tour with The Maine, their most recent album, dealing with the pressures of coming back after their hiatus, and much more.

It’s not bad. We got hung up at the border for a few hours, but they let us through.

This is your first time in Canada, right?

It is, actually. It’s weird because we’ve always done full US tours but I don’t know why we’ve never made it across the border. It’s cool though. I’m excited.

You guys are about three and a half weeks into your tour with The Maine. How’s it been going so far?

It’s really good. It’s a different kind of crowd than we’re used to playing to, but I like when bands kind of step out of their element and out of their comfort zone and do something a little bit different.

How have you been finding the different crowd has been responding to you guys?

How do you approach a tour like this knowing that you guys are opening and playing for a lot of people that haven’t heard you before as opposed to doing a headliner?

I guess you kind of have to see your 45 minute set as almost like a trailer or something just to get people involved in your set and into your band because there are gonna be Lydia fans but a lot of the people there haven’t heard about you. So you kind of have to put your best songs forward.

How have you found this tour package has been fitting together?

It’s awesome. I love small package tours. Like, Arkells play, we play, the Maine plays. It’s just really simple and to the point and it’s cool. After about four or five bands, I think even people in the crowd get blown out. They’re just like, “I’m over this. This is too much music to listen to in one city.”

You guys released your most recent album Paint It Golden at the end of 2011, but before that it was actually looking like you guys weren’t going to be making any more music for a while — you announced a hiatus and did the whole farewell tour. What was the one defining moment that you decided you needed to keep the band together?

Well, I was gonna put out some music under my own name. Me and the other guy [Steve McGraw] that started the band just couldn’t get along anymore, and so about like three or four days before the farewell tour he ended up just leaving. And so me and Craig [Taylor], the drummer, we’ve been making music together for quite a while, and we did the whole farewell tour and there were just so many people just pouring their hearts out to us telling us not to leave. And it was just amazing that so many people were that attached to the music. So we got home and we talked about it for a little while. I was on the fence and I didn’t really know if I was gonna do it and then Craig kind of ended up talking me into it. He was like, “There’s too many people that really are attached to this band, dude. You shouldn’t let this go.” And we just really like making music together so we were like, let’s just keep doing it.

How did you approach Paint It Golden differently than the other albums, especially the fact that it was just the two of you?

I had had some of the songs for Paint It Golden for quite some time, but for whatever reason I didn’t use them on certain records. Probably about half of the songs on the record I had had for years and I was just kind of putting them on the backburner because I didn’t really want to mix them with [Steve] – we just didn’t match anymore. And so a lot of the songs I was like, “This is a really cool song, we should put this on the record.” And then the other half we just kind of let flow out. So I didn’t really approach it differently, to be honest. It was kind of the same process, me and Craig just working stuff out in the studio.

Did you feel like there were a lot of expectations with this record, saying you weren’t going to make music anymore and then putting an album out?

Absolutely. This was probably the hardest record to release because when you come back with new music, people are like, “You better be coming back for a reason and not just putting out a shit record and saying you’re back.” So there was a lot of expectation, obviously a lot of naysayers and whatnot. But it got a really good response, so I was happy about that. I mean, I really like the record, so that’s all you can do.

You did the record with Matt Malpass, who also did Assailants and Illuminate, and you also have a side project with him [The Cinema]. What is it about Matt’s production style that keeps you coming back to him and allows you to work well with him?

I really can’t see myself working with anybody else at this point. You know when you just have something with someone that just kind of clicks together and you don’t really know how to explain it? Me and him just work really well together. And he’s really good at calling me out. Like, if I’m doing something that’s straying off and it could be better he immediately just calls me out on it, which I really like. I’ve recorded with certain people where whatever you do they’re just like, “Yeah, sounds great. Let’s track it.” And I was like, “Dude, I need some constructive criticism.”

Yeah, exactly. And he’s really good at that. And he’s also just a really good producer. So we decided to even do another project together, The Cinema, because we both agreed we work really well together.

How are you finding balancing The Cinema and Lydia so far? Since it hasn’t been too long that you’ve been doing both, how do you think you’ll continue to balance it in the future?

I mean, it’s a little bit tough. It’s moreso that we’re trying to balance the touring schedules out because our management is trying to get The Cinema on its first tour this summer. We just kind of did the record for fun but then it got a really good response so management really wants a tour to happen around it. So it’s moreso balancing the touring between Lydia and The Cinema because there are so many countries and markets and two bands and there’s not a lot of time to do it all. But writing wise, it’s always that Matt’ll doodle out just a simple beat and a progression and he’ll send it to me. I’ll put some more guitar, piano, whatever on it and send it back. We always just go back and forth with songs.

Exactly. That’s what the whole record pretty much was. We were only in the same room when we were actually tracking the record. So we just went back and forth until we were really happy with it, and then I flew to Atlanta and we tracked everything. So it’s moreso balancing the touring stuff than the actual music.

What do you think the future holds for Lydia after this tour?

We’re definitely gonna make another album. I probably have five songs already written and somewhat done. I don’t really like to finish a song until I get in the studio. I don’t know what it is — I think it’s like 50% procrastination and 50% that I work better when I’m just on the spot. But I probably have like five songs somewhat done, and so I’m thinking we’ll probably have another record out maybe by Christmas, but most likely by early next year.