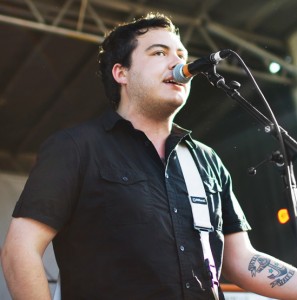 idobi got the chance to catch up with AJ Perdomo, vocalist and bassist of The Dangerous Summer, to talk about the North American summer tour they just kicked off, writing for their new album, their current drummer situation, and more. Big thanks to AJ, who was exhausted from giving it all during their set but still took the time to talk with us.

We’re here with AJ from The Dangerous Summer checking in from the Toronto date of their summer tour. How’s it going, man?

It’s going good. Third date of the tour. We’ve had some good crowds, some good shows, and we’re filming a little bit of what’s gonna become a DVD, documentary-style. We’re working on it.

Any word yet on the anticipated release date of the DVD?

We don’t know the exact date, but it’s gonna be in the next few months, so be on the lookout for that.

So you kicked off the tour two days ago in Maryland, and that was actually on the day War Paint had its first birthday.

Oh yeah, it was beautiful. I loved it.

Did you guys do anything special to celebrate that?

We didn’t really. I wish we would’ve. I mean, we played our hometown show and there were so many good fans and I had a good time, so I was happy. We did everything that we would’ve wanted to do.

Speaking of War Paint, it was your first album to debut on the Billboard 200. Was that a huge milestone for you guys?

That was crazy, because it’s like, the Billboard 200…what the fuck, you know? That’s something that you dream about. It just feels good when there’s that gratification. I want to win a Grammy one day. That’s on the bucket list.

Bryan Nelson from The Ataris is doing sound for you on this tour. How did that get linked up?

He’s just a cool guy, and he’s amazing at sound — he’s making us sound so good. He wasn’t doing anything, so it worked out and we’re happy as fuck.

You guys were also planning on doing this tour with your original drummer Tyler Minsberg. What ended up happening with that?

He actually got carpal tunnel syndrome. He’s having some troubles right now.

When did you find out? How fast did you have to find a new drummer?

Really fast, probably a week before the tour. I dunno, it’s rough, but we’re just dealing with it and we’re rolling with all the punches. We don’t want to do anything to disappoint the fans. We don’t want to not play the shows. It’s a rough time, you know, but it’s a great time. I mean, I think in a few months I might look back and think, “That was one of the best times of my life.” Life goes on and life will always go on. And life’s good.

If he’s able to get the carpal tunnel worked out, are you guys still planning on writing the new album with him?

Yeah, I mean, we were talking about it with him before and we’re always welcoming him. Whenever he can, we’d love to have him out. It works out when it does, it doesn’t when it doesn’t, and that’s how it goes.

Jeff Hurn is filling in as the band’s touring drummer for the rest of the summer.

How far along are you guys in the writing process? I know you were writing a little bit when you were off tour.

I mean, it’s hard to say. We’ve definitely got a lot of ideas. It’s one of those processes you kind of want to make more organic as you go on. It’s like, you can’t just get together and say, “This is a song, this is a song,” and make an album out of that. You gotta wait and feel it out and everything has to be right. It’s like a first kiss — it has to be perfect. You gotta do it right.

About eight months ago, you put up a video of you guys jamming a new song idea at band practice. It had kind of a darker, Brand New sort of vibe to it, kind of like what we heard with Work In Progress. Is that something we’re going to be hearing a lot of on the new album?

I know there’s still a lot of writing to be done and you’re not trying to rush it, but in a perfect world, when would you say you’d like to get into the studio?

End of this year. That’d be cool, but you never know. Everything’s just up in the air. I wish I knew a lot more, but we’re just writing and writing and when we’re happy, we’re happy. And that’s gonna be that, you know? It’s about writing good music. It’s not about anything else. It’s not about finishing an album, it’s about being happy with it as a whole. It’s an album, not just a bunch of random songs. We work every day and we work really hard. Even when we’re home, we’re just writing and writing and practicing and everything. We’re just working and working and we’re never gonna stop.

You guys are gonna be on the road for the next month straight. What would you say is the number one reason kids should come check out this tour?

We’re gonna have a good time. We’re gonna chill, party, play all the songs. We try to play as many songs as we possibly can. Like tonight we did like thirteen, fourteen. We try to do just as many as we can fit in that timeframe. That’s the goal.

Check out The Dangerous Summer across North America this July and August with New Empire and From Indian Lakes. Dates can be found at thedangeroussummer.net/tour.