When I ask how they would describe their sound they invent a new genre: Post Emo Sadcore, while laughing as they label themselves the “pioneers of tears”

Need a dose of new pop-punk in your life? Press play to listen to an exclusive stream of Chasing Down Sunset’s latest EP, A Proper Introduction, and scroll down to read all about why this summer marks a milestone in their career.

At sixteen, a lot of teens are concerned about school, friends, and not much else. But at sixteen, Jill Beckett—guitarist and vocalist in New Jersey’s Chasing Down Sunset— put together an entire summer tour for her pop punk band, and they’re only getting started.

It’s a Friday night and the five of them—Beckett, vocalist Jimmy Fasulo, drummer Dan McCool, bassist Ryan Ross, and guitarist Zion Dixon—have just come out of the pool to chat with me. I even get serenaded with an a capella version of Metro Station’s “Shake It” while I work out some technical difficulties.

Their latest EP, A Proper Introduction, releases today and the band is equal parts nervous and excited. “It’s completely different from anything we’ve ever done” says Beckett. “Our goal for putting this out in public is to have something break, to get on the next level as a band.” Ross, who was a fan of the band before joining about a year ago, is really confident, “I don’t even question that people will love it.” “Everything’s going so well so fast,” says Fasulo. “There’s no conceivable reason things won’t do reasonably well…our margin of error is very small.” 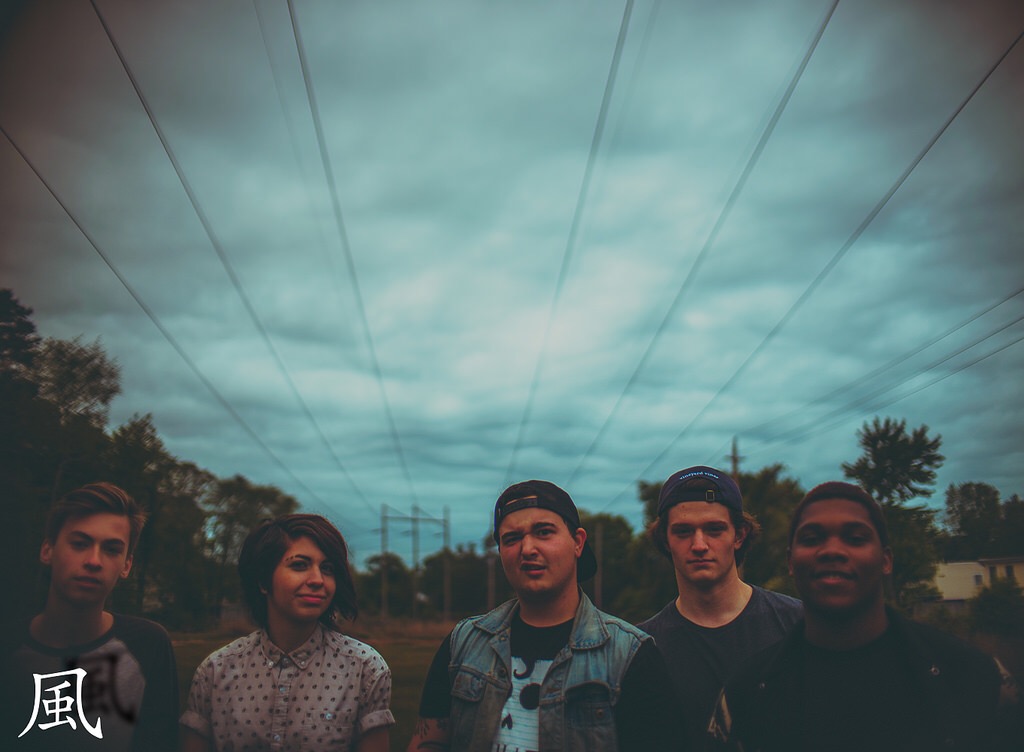 The EP is the first to feature Ross and Fasulo and it was produced by long-time friend and father-figure to the band, Rob Chiarappa. Recording the album, according to Fasulo, was both “an incredible clusterfuck but also entirely perfect.” The members rarely saw each other during the recording process but Chiarappa made sure the songs sounded as smooth and seamless as if the band were all in the same room at the same time. “He took on a sixth member status…he did more work on this album than we did,” gushes Fasulo. Because Chiarappa had also produced their first EP And A Step Forward, and has known the band since their first show, he was already aware of their potential. He really helped them bring out their best sound. “He evolved as a producer as we evolved and it’s crazy to see how much we changed…Rob’s just never stopped supporting us,” says Beckett, who counts herself lucky to have Chiarappa as a friend. The band jokes about how they’re so indebted to their producer they’re considering plastering his face all over their merch.

Recording the album, according to Fasulo, was both “an incredible clusterfuck but also entirely perfect.”

When I ask how they would describe their sound they invent a new genre: Post Emo Sadcore, while laughing as they label themselves the “pioneers of tears”. “I joined the band after it was already a thing, so I’m not really a part of the instrumentation,” says Fasulo. “But their tones and their rhythm section and the way they can build a song always felt really different to me…not typical pop-punk.” He goes on to describe Beckett’s vocals as “beautiful…with a ballsy texture. She sounds like no other girls that are singing right now”, while McCool mentions that their sound has matured since their first EP, especially with the addition of two new members.

For a group so young—four of the members are still in high school—they have a wide range of musical influences. Dixon, the most soft-spoken member, lists Knuckle Puck as being a major inspiration for his guitar leads, saying he admires how “soothing” he finds their mix of melodies and harmonies. Fasulo grew up listening to soul music and appreciates the way they “knew how to deliver a message but still make it catchy”, explaining that he likes writing lyrics that sound simple but carry a heavier message. McCool looks up to drummers for all different genres, but when it comes to writing drums for Chasing Down Sunset, he focuses on what would fit with their own unique sound rather than trying to copy someone else. “We never tried to copy another band or try to say ‘let’s be like this band or that band’,” says Beckett. “I write lyrics for myself and if one of them’s good, we use it.” Ross, meanwhile, spent most of his childhood listening to grunge bands like Sonic Youth and Tigers Jaw, and the band agrees that it shows through his bass tones. With so many different inspirations, you would think they’d have a hard time coming up with a cohesive sound, but they all click together perfectly—I can hear the camaraderie over the phone, as they tease and interrupt each other in their eagerness to talk about their music.

The band jokes about how they’re so indebted to their producer they’re considering plastering his face all over their merch.

I ask them who in the industry they want to work with, and, right away, Fasulo names Kris Crummett as his bucket list producer, citing PMtoday’s In Medias Res as an album he admires. The band also throws around other artists they like: Head North, State Champs, A Way Away, and Elder Brother make the list, with them also joking that opening for Bon Iver would be funny just because it would confuse the audience. Beckett also mentions Panic! at the Disco, and Fasulo promises that “Brendon Urie would leave his wife” by the end of the tour (isn’t that the dream?). For now, though, they’re doing a short tour at the end of the month, starting July 20, including a hometown show at The Barn in New Jersey on July 29, and they tease a fall tour announcement, but won’t give me any details, though they promise me a spot on the guestlist if they make it to Toronto.

The band credits Beckett as doing 90% of the behind-the-scenes work when it comes to getting them into the public eye; she’s been working on booking tour dates for them since early May, but it’s proving hard to lock down all the details. “Booking a tour DIY, a lot of things fall through last minute and a lot of things appear last minute,” says Fasulo. After this tour is done, they’ll start working on material again—Fasulo and Beckett are planning a new music video—and they’re considering finding another band to put out a split with. They also might go the Our Last Night route and put out cover songs, but come fall, it will be harder for them to find the time to meet up when they’re all going to school full-time. 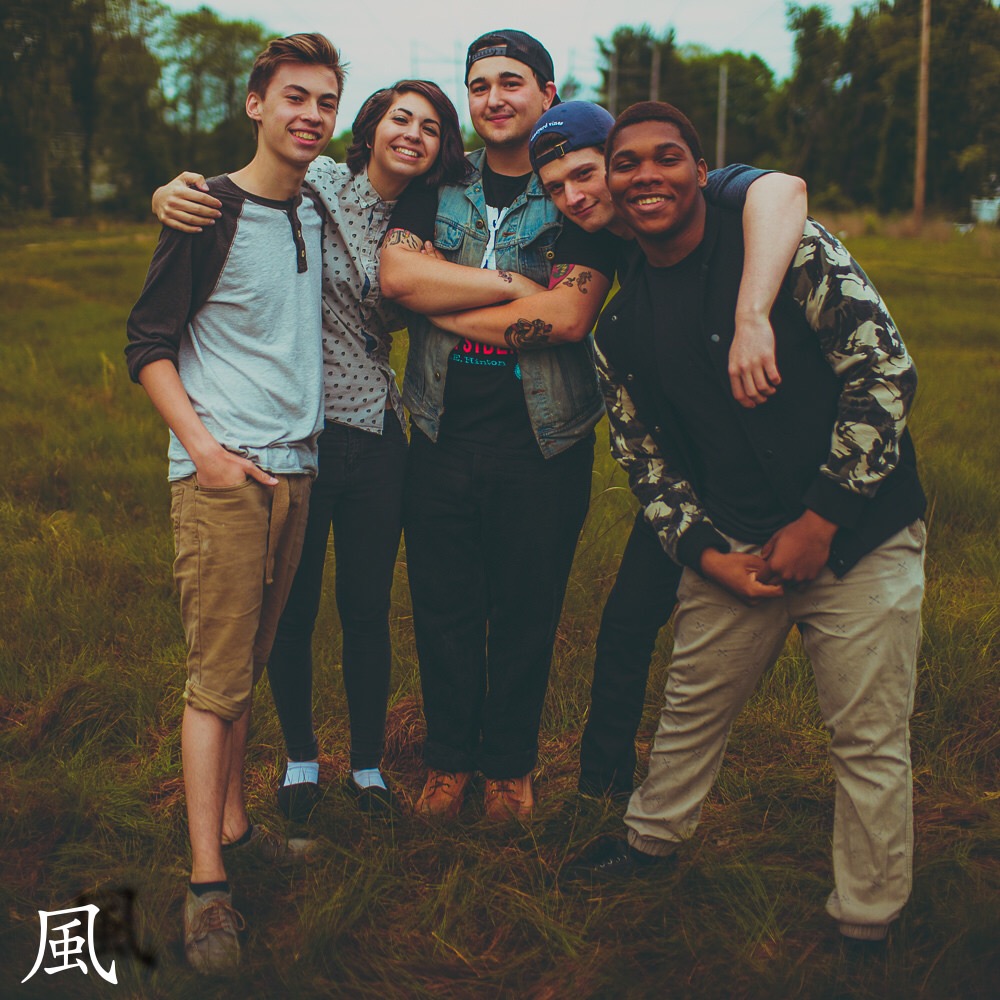 They still have a few months before they have to worry about homework assignments and extra-curriculars though, so they’re reveling in the opportunities they’re experiencing now. And at the end of the day, they’re thankful to have people who care enough to pay attention to them. “We’re just bros making music,” says Fasulo modestly.

With so many different inspirations, you would think they’d have a hard time coming up with a cohesive sound, but they all click together perfectly

By the time our Friday night pool party is done, all I can say is pay attention to Chasing Down Sunset: they’re going to make post emo sadcore a very successful genre.

Check out the EP, and let us know what you think on Twitter!