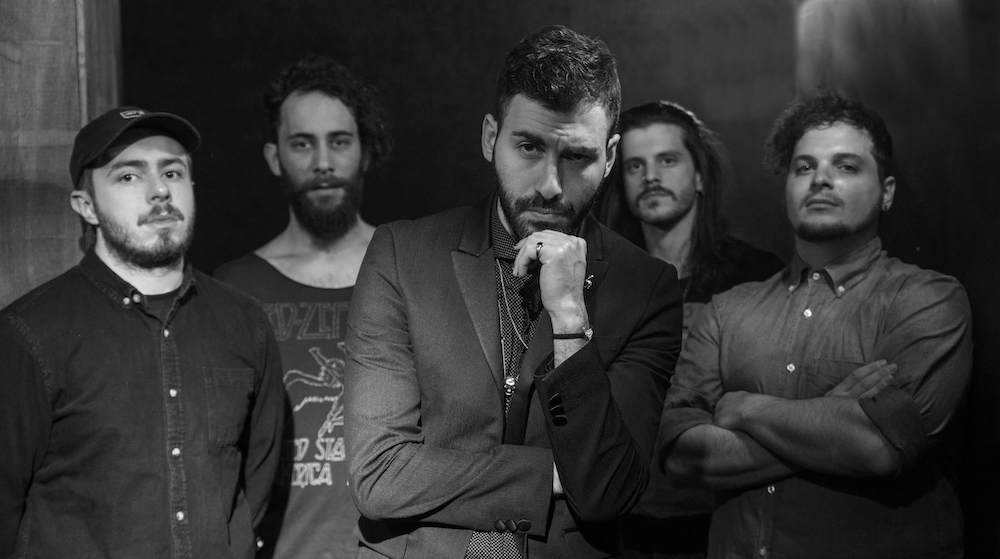 Turn the speakers up on the weekend with today’s Inbox Jukebox Presents from 7he 7ouch. The hard rock quintet’s upcoming debut EP Seventyseven is out on October 29th but it’s so explosive we’re letting you in to all the madness today!

Kicking off with the breakneck pace of “Solution”, the lead single wastes no time in defining who the London/Athens quintet are—fiery riffs give way to an insanely catchy chorus you can already hear fans screaming back to them at shows. “Our debut single ‘Solution’ was inspired by the political turmoil around the world and the extreme ideologies people have on how to deal with the issues,” the band says of the track. The lyrics, “Are the roads clear we’re living with the fear / Political unawareness brought us into here,” send the message that 7he 7ouch have a voice and they’re ready to use it—and you should use yours too.

“Most of the music parts have been recorded here in London to bring the essence of the city and our new surroundings into the music, but there were also parts done back home in Athens too.”

“You Can” is a winding slow-burn of a tune that, by the end of the last chorus, you’ll be ready to “run as fast as you can, you can, you can…” “My Face (Nanana)” follows suit with its anthemic riffs and gang vocals to give you a fresh dose of energy. There isn’t time for slowing down with Seventyseven: The band have got too much punch so you’d better put your fists up and get ready…to air-guitar along to the sweet solo in “Knobs”. “…‘My Face’ is about overcoming rejection and ‘Knobs’ is an ode to those people that come into our lives and help us keep going and make memories, while doing what we love, making music!”

“This is your wake up call,” vocalist Constantine proclaims in “Rage” and you’ll feel it—7he 7ouch’s EP will move you physically and emotionally, telling stories of their journey from Greece to the rock scene of London, of facing hardships and disillusionment with the state of society. “Coming to England was a huge leap for us,” the band says. “It was a rough start, but four of us eventually managed to rent a studio flat, which was for one person, after wandering the streets with all our gear and belongings for a while.” Their hard work ethic has paid off; by the time “Blitz” rolls around to send the EP off in style, you’ll be ready to march alongside the band as they take on the world, singing, “I’m feeling so strong, feeling so strong…”

Fun Facts From The Band:

“We ate pizza evey single day while recording because it was all we could afford, so we made a pizza ’tower’ out of the boxes to see if we could reach the ceiling by the time we finished the recordings, and we ended up having two huge pillars of pizza.”

“We threw a birthday party for Stelio’s bday will recording at the SSR studios in Camden, but being broke we ended up throwing a mini party in Starbucks and instead of a cake we came in with a £1 muffin.”